As the battle between the US and China over tariffs goes on, an age-old ideological feud is being waged, pitting Beijing’s Communist Party against Washington-style democracy. It’s not a fight for trade or for territory, it’s for hearts and minds, according to Tara McKelvey and Zhaoyin Feng.

The term “influence operations” describes the way that government officials try to find out information about another country and also the way they attempt to sway the views of people who live there, according to researchers at the nonpartisan Rand Corporation. There are five areas where Americans and Chinese are promoting their own political and cultural ideas – and are facing pushback from the other side, they write for the BBC: 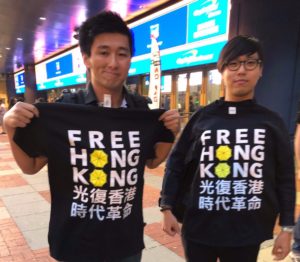 The Victims of Communism Memorial Foundation this week handed out “Free Hong Kong” t-shirts at the NBA preseason game between the Washington Wizards and the Chinese team Guangzhou Long-Lions. They were a hit, and you can get your own with a $15 donation here.

Over the past six years, under the rule of Xi Jinping, China has radically overhauled and expanded its strategy to wield influence within other states’ domestic politics and societies. This strategy is most apparent in Asia-Pacific states near China, although it is also increasingly evident in North America, Europe, Australia, and New Zealand, the Taiwan Foundation for Democracy adds:

This influence and information campaign is designed partly to bolster China’s power but also partly to undermine the space for rights and democracy in other states, and to potentially support pro-China authoritarian leaders. The campaign has had, and could have, a substantially negative impact on rights and democracy generally, and on the freedoms of democratic politicians, media outlets, and other civil society groups in Asian nations specifically. This seminar will explore how China’s influence and information campaign is affecting civil society, politics, and foreign policy in Taiwan and in other states.