President Joe Biden’s nominee for United Nations ambassador will pledge to restore American leadership, warning that its absence in recent years has allowed China to fill the void, Bloomberg reports. 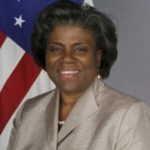 “When America shows up, when we are consistent and persistent, when we exert our influence in accordance with our values, the United Nations can be an indispensable institution for advancing peace, security, and our collective well-being,” Linda Thomas-Greenfield (right) will say at her confirmation hearing before the Senate Foreign Relations Committee on Wednesday.

“If instead we walk away from the table, and allow others to fill the void, the global community suffers — and so do American interests,” she plans to say. “In particular: We know China is working across the UN system to drive an authoritarian agenda that stands in opposition to the founding values of the institution — American values,” added Thomas-Greenfield, a former board member of the National Endowment for Democracy (NED).

As World Health Organization officials publicly praised China in the critical early weeks of the outbreak of what would come to be known as COVID-19, FRONTLINE reports (above) they privately expressed concern about the Communist regime’s lack of transparency and worried that the WHO would be accused of failing to warn the world. The revelation comes in leaked recordings obtained by the Associated Press and shared with FRONTLINE that are heard in the upcoming FRONTLINE documentary China’s COVID Secrets, a coproduction with the BBC.

In actuality, the CCP fully understands that its ideology is its Achilles’ heel, according to Bradley A. Thayer, the co-author of How China Sees the World: Han-Centrism and the Balance of Power in International Politics, and Lianchao Han, vice president of Citizen Power Initiatives for China. The ideology is based on false assertions that the party rules in the name of the “workers/peasants alliance,” which provides it with self-justified authority to rule over 1.4 billion people without their consent. Its ideology explains which states are allies and which are foes, and thus yields the ultimate reason

The CCP knows that it cannot defeat the West on ideological grounds so China’s effort to promote interests over ideology is a calculated political warfare strategy to achieve four aims, they write for the Hill:

“In reality, the distinction between ideology and interest is false. Ideology largely defines interests,” Thayer and Han contend. “Ideology defines why the CCP brutalizes the Uighurs, Tibetans and other ethnic peoples, and the Hong Kong and Chinese democracy activists. It defines why the CCP must destroy liberal democracy and confront the U.S.” RTWT

Tune in next week for a fascinating and timely discussion about China’s growing push for influence around the globe, the risks it poses to developing and established democracies and to America’s leadership for a free world, Foreign Policy adds.

The conversation will draw on new findings from a forthcoming International Republican Institute report on Beijing’s geo-strategic play around the COVID-19 crisis to advance CCP objectives: The research suggests China has increased its use of what the National Endowment for Democracy calls sharp power – a slate of tactical influence and information campaigns, particularly in developing countries – to shape perceptions of China as a responsible, strong and benevolent world leader. What are the methods and impacts of these foreign influence activities, and how can open societies build democratic resilience to confront it?

Join to hear from a panel of leading experts on CCP influence as well as U.S. lawmakers to learn how Congress plans to approach its relationship with Beijing and possible legislative measures to protect democracy at home and around the developing world.