The job of the International Department of China’s ruling Communist Party is to win support among foreign political parties by cultivating what’s been called a “new Comintern,” the Economist observes.

CCP officials preach the virtues of a form of governance that they believe is making China rich and can help other countries, too. Some welcome this message, even in multiparty democracies. At the poverty-alleviation forum, the secretary-general of Kenya’s ruling Jubilee Party, Raphael Tuju, was quoted as saying that China’s Communist Party should be an example for his own, it adds: 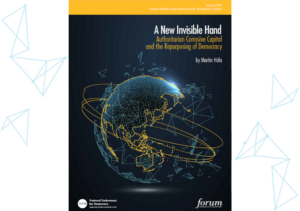 The department says it has contact with more than 600 political organisations in over 160 countries. Under Mr Xi such engagements have grown. Christine Hackenesch and Julia Bader, writing for International Studies Quarterly [in The Struggle for Minds and Influence: The Chinese Communist Party’s Global Outreach], found that the number of high-level party-to-party meetings increased by more than 50% between 2012 and 2017, to more than 230 annually. Martin Hala of Sinopsis [author of a valuable report from the NED’s International Forum – right], which monitors China’s activities in Central Europe, has called this akin to forming a “new Comintern”—a reference to the old Soviet-led international communist movement.

The department’s activities constitute a strategic use of what the National Endowment for Democracy (NED), the Washington-based democracy assistance group, calls Beijing’s sharp power.

There is a critical difference, however. China is not preaching communism, the Economist adds. Its aim, rather, is to show that a country can become richer without being democratic. That message finds attentive ears among politicians who find the checks and balances of democracy irksome.

Meanwhile, the CCP’s propagandists are taking umbrage at the NED’s opposition to the regime’s cultural genocide against the Uyghurs, citing a Human Rights Day tweet by the official account for the National Endowment for Democracy (NED) simply stating its aim “To further #humanrights & human dignity for all people in China, the National Endowment for Democracy has funded Uyghur groups since 2004.”