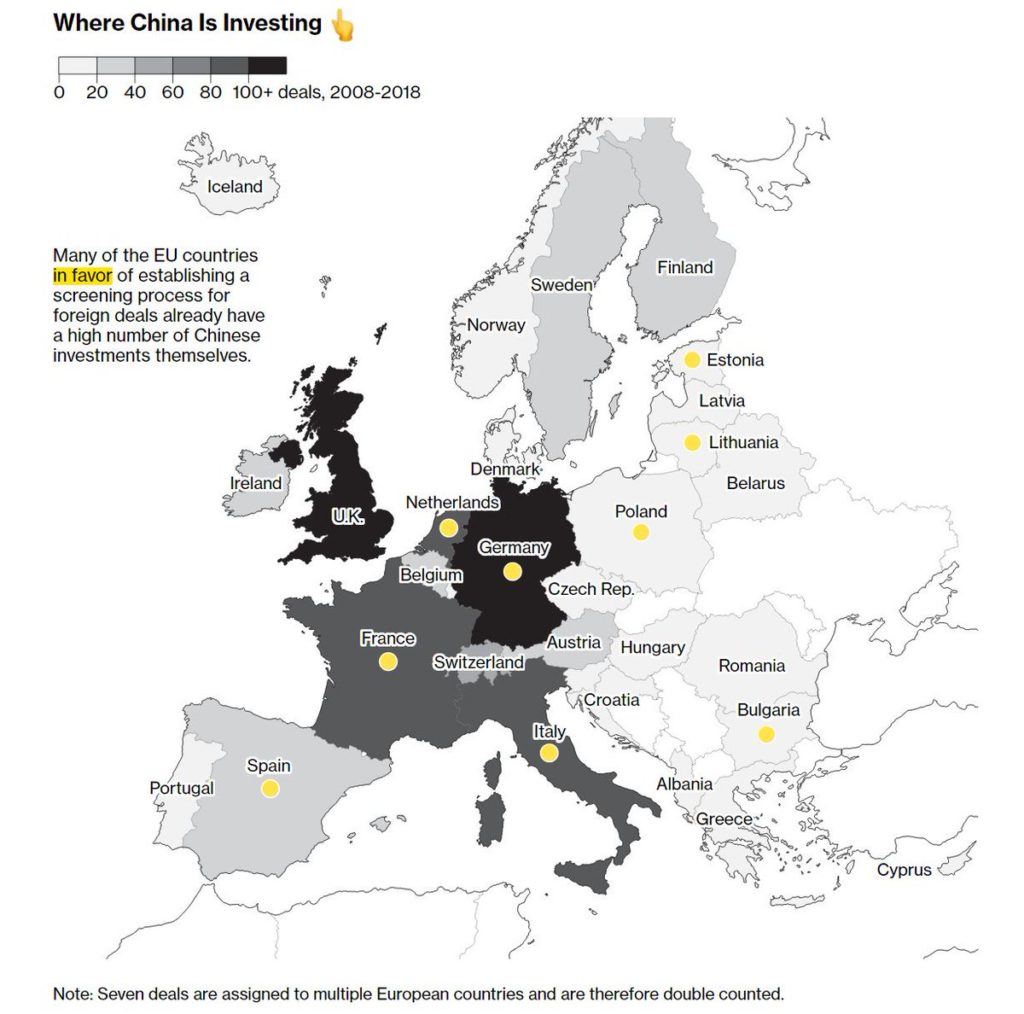 China has bought or invested in assets in Europe amounting to at least $318 billion over the past 10 years, Bloomberg reports, in the most comprehensive audit to date of China’s presence in Europe:

The continent saw roughly 45 percent more China-related activity than the U.S. during this period, in dollar terms, according to available data. The volume and nature of some of these investments, from critical infrastructure in eastern and southern Europe to high-tech companies in the west, have raised a red flag at the European Union level.

Many observers fear that China’s growing economic leverage is being translated into authoritarian political influence – what a recent National Endowment for Democracy report called ‘sharp power.’

China continues to spread the worst features of its authoritarian system, including restrictions on activists, civil society, freedom of expression, and the use of arbitrary surveillance, according to the State Department’s 2017 Country Reports on Human Rights Practices.

Beijing’s ‘sharp power’ has brought into focus the crucial issue of the future of the ‘rules-based order’, note analysts Nick Bisley and Benjamin Schreer.

Knowing who is doing all this buying is crucial to understand how such activity fits into China’s official and unofficial foreign policy aims, Bloomberg adds:

In all, more than 670 Chinese or qualifying Hong Kong-based entities have invested in Europe since 2008. (Assets invested in or bought by Hong Kong entities without significant ties to mainland China are excluded from this analysis.) Of those, almost 100 are state-backed companies or investment funds, which collectively had a hand in transactions worth at least $162 billion, or 63 percent of the total reported deal value, as compiled by Bloomberg.

Yet the line between state and private enterprises is far more blurred in China than in Europe, Bloomberg adds. RTWT

At Foreign Policy, Bethany Allen-Ebrahimian this week reported on efforts by the Communist Party of China to set up Party branches at host universities, notes China Digital Times:

Allen-Ebrahimian’s report is based on her review of official university and state media articles celebrating and reporting on the establishment of political entities in overseas universities, situating this trend into the context of Xi Jinping’s ongoing campaigns to consolidate state power under the CCP, and to reinforce ideological orthodoxy in domestic universities, the Party, and society at large.