Independent media are facing a “perfect storm” of challenges, from capture by oligarchs to the emergence of “post-truth” politics, says Mark Nelson, director of the Center for International Media Assistance (above).

Media in Southern Africa, for example, face a harsh socio-economic environment characterized by increasing levels of poverty, unemployment, migration, deindustrialisation, dwindling media revenues and downsizing of media operations. In light of these cross cutting challenges, the Media Alliance of Zimbabwe (MAZ) is taking steps towards establishing a common framework for strengthening media freedom in the region, Newsday’s Nigel Nyamutumbu reports: 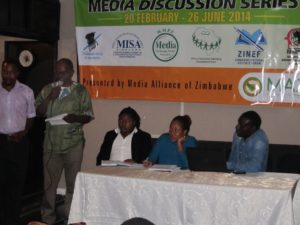 MAZ (right) with support from international co-operating partners, mainly the National Endowment for Democracy (NED) and the International Media Support (IMS), has been implementing various interventions that respond to the needs of the media sector in Southern Africa. To date, MAZ has been able to co-ordinate media stakeholders towards developing a regional strategy that is anchored on building consensus around the priority areas for media development within Southern Africa. Among other issues, the strategy identifies a cross range of priorities and areas requiring intervention, including undemocratic laws, threats on the safety of journalists and activists, decline in professional journalism standards and unsustainable models in media operations. RTWT

Three Radio Free Europe/Radio Liberty (RFE/RL) journalists were assaulted in Armenia over the weekend during mass rallies against Prime Minister Serzh Sarkisian that culminated in his resignation today:

On April 22, a balaclava-clad police officer assaulted Naira Bulghadarian, a reporter with RFE/RL’s Armenian Service, known locally as Radio Azatutyun. He damaged the camera she was using to live-stream events from Yerevan’s central Republic Square, a focal point of the protests, disrupting the broadcast for the service’s Radio Azatutyun TV. ….One day earlier, broadcast producer Anatoly Yeghiazarian was pushed to the ground, kicked in the stomach, and beaten by police officers ….That same day, correspondent Arus Hakobian was assaulted and injured by a man in plainclothes while she was live-streaming a protest on a highway about 30 kilometers south of Yerevan. The incident was caught on video, which shows police officers at the scene doing nothing to stop the attacker, despite Hakobian’s repeated shrieks.

“These attacks against journalists doing their jobs are unacceptable,” said RFE/RL President Thomas Kent. “The fact that police have been among the perpetrators, or have abetted them, is especially disturbing, and we call for swift and appropriate measures to ensure they are held accountable.”

Muzzled Media: Global Threats To Freedom Of The Press