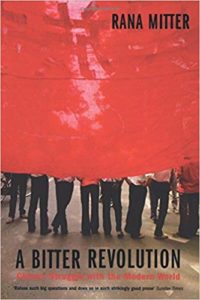 What are the chances of China managing to turn the next three decades into a narrative as powerful as its story since 1978, which contains both a rise to economic superpower status and a continuing control over individual freedoms?

On its current path, China will run up against major obstacles, notes Rana Mitter, Professor of the History and Politics of Modern China at the University of Oxford and Director of the University China Centre. The drive towards globalizing China is becoming harder to reconcile with a domestic regime that is closing down the space for discussion, he writes for Chatham House, the London-based foreign policy think-tank:

The technological revolution can help embed a Chinese economic presence, but it is unlikely on its own to create widespread admiration of Chinese values or what they bring to other societies.

The Chinese Communist Party has had some of its greatest successes in the past half-century when it proved open to major change: the shift from a command economy to market socialism, or the move from the totalitarianism that Mao espoused at the height of his regime to the relatively open periods of the 1980s and the early 2000s.

Could the development of a more liberal state, with one-party rule, but a genuinely free public sphere, be the next stage? asks Mitter, author of A Bitter Revolution: China’s Struggle with the Modern World.