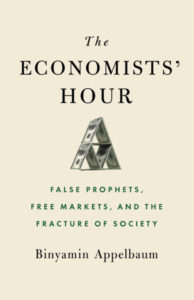 Misplaced faith in markets lies behind liberal democracies’ legitimacy crisis, according to Sebastian Mallaby, the Paul A. Volcker Senior Fellow for International Economics at the Council on Foreign Relations and the author of The Man Who Knew: The Life and Times of Alan Greenspan.

The single-minded embrace of markets has come at the expense of soaring economic inequality and the faltering health of liberal democracy, Binyamin Appelbaum argues in The Economists’ Hour: False Prophets, Free Markets, and the Fracture of Society. Economists have repeatedly made excessive claims for their discipline, Mallaby writes for The Atlantic:

In the ’60s, Kennedy’s and Johnson’s advisers thought they had the business cycle tamed. They believed they could prevent recessions by “fine-tuning” tax and spending policies. When this expectation was exposed as hubris, Milton Friedman urged central banks to focus exclusively on the supply of money circulating in the economy. This too was soon discredited. From the ’90s onward, economists oversold the benefits of targeting inflation, forgetting that other perils—the human cost of unemployment, the destabilization wrought by financial bubbles—might well be worse than rising prices. Meanwhile, [Alan] Greenspan and [Larry] Summers ducked the political challenge of buffering new kinds of financial trading with regulatory safeguards. To be fair, the Wall Street lobbies presented more of an obstacle to regulation than critics acknowledge. Still, Greenspan and Summers miscalculated. 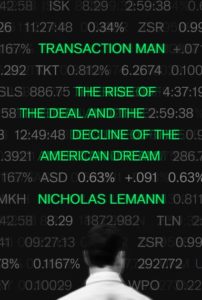 Stable democratic institutions have given way to frictionless transactions, which are celebrated no matter what collateral damage they generate. The concentration of great wealth has coincided with the fraying of social ties and the rise of inequality, Nicholas Lemann contends in Transaction Man: The Rise of the Deal and the Decline of the American Dream.

“The upshot was the whirlwind of the past decade: the greatest financial crash in recent memory, and a crisis of legitimacy in the world’s advanced democracies,” Mallaby concludes in a review of two new books.* RTWT

Transaction Man: The Rise of the Deal and the Decline of the American Dream, Nicholas Lemann. The Economists’ Hour: False Prophets, Free Markets, and the Fracture of Society, Binyamin Appelbaum.