The coronavirus pandemic has crystallized the critical connection between human rights, accountability and public health. China’s ruthless suppression of free speech and its lack of transparency gave the disease wings to fly around the world.  The crisis is showing the world that Beijing isn’t just seeking to avoid accountability, it is seeking to change the rules, according to analyst Emilie Kao.

American citizens and those in other free countries insist on fundamental human-rights, transparency and accountability. These are, after all, elements essential to a functioning democracy. Laws that protect a robust civil society from being fettered by the government serve the public interest by protecting whistleblowers, holding parties accountable, and giving victims access to justice, she writes for the National Interest:

But, in authoritarian one-party states like China, the state holds a monopoly on information, silences whistleblowers, and denies access to justice. Citizens face almost certain punishment for protesting and are rarely able to hold the state accountable. The Chinese Communist Party’s (CCP) censorship has repeatedly undermined the people’s ability to protect public health through sharing information with each other. As Heritage Senior Policy Analyst – and NED Penn Kemble fellow – Olivia Enos writes, Chinese law makes it “illegal for any entity other than the Ministry of Health to break the news about a health-related issue…actually classifying such information as a state secret.” 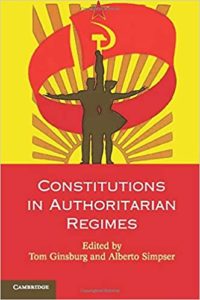 Given China’s rising influence at the UN, the international community urgently needs to grasp the intrinsic relationship between human rights, accountability, and public health, adds Kao. Leadership needs to come not just from America, but from democracies around the world. Otherwise, Beijing may further violate and transform international norms unleashing even more deadly global catastrophes in the future.  RTWT

The EU’s 27 ambassadors to China published an op-ed in the government-run China Daily to mark the 45th anniversary of EU-China diplomatic relations. And instead of being quickly forgotten, the op-ed turned into a diplomatic disaster, mostly for the European Union. It turns out that the text was censored by the Communist editors responding to orders from their own ministry of foreign affairs, erasing a tiny mention of the Chinese origins of COVID-19, notes Jakub Grygiel, an associate professor of politics at the Catholic University of America and author of Return of the Barbarians: Confronting Non-State Actors from Ancient Rome to the Present. 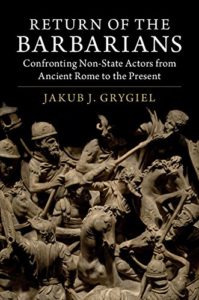 This is not surprising coming from a totalitarian state: Communism is one big lie and it fears even a suggestion of truth. The Chinese Communist Party (CCP) is, after all, not that different from its historic predecessors in Moscow and other world capitals. The surprising part is that the EU Ambassador agreed to the censored version. He accepted a lie for the promise of harmony, he writes for the American Interest:

The EU diplomats who wrote this China Daily op-ed appear hellbent on seeking a partnership with an expansionistic China, going against the very policies that are taking shape in EU member states. This divergence of views—between some European states aware of the ongoing competition with China and parts of the EU stuck in a continued search for harmony with Communist Beijing—diminishes the relevance of the EU in the age of great power competition.

Today’s authoritarian regimes are increasingly facile in their engagement with international legal norms and institutions, deploying legal arguments with greater acuity, even as they introduce new forms of repression that are legally and technologically sophisticated, notes analyst Tom Ginsburg, co-author of Constitutions in Authoritarian Regimes. 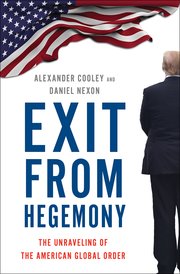 China has become a threat because its leaders are promoting a closed, authoritarian model as an alternative to democratic governance and free-market norms, former National Security Advisor H.R. McMaster writes for The Atlantic.

In Exit from Hegemony: The Unraveling of the American Global Order (above), Alexander Cooley and Daniel Nexon identify three ways in which the primacy of the liberal international order is being eroded from above, laterally, and from below: