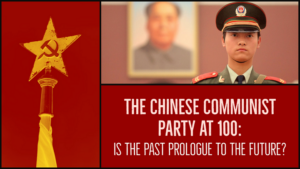 A close read of a new resolution from China’s ruling Communist Party shows how Xi Jinping is trying to leverage the weight of history to drive China along a path to global supremacy distinct from Western models, Chun Han Wong and Keith Zhai observe. Among the key takeaways, it takes an unequivocal stand against Western democracy, they write in a must-read article for the Wall Street Journal:

The new resolution warns that the party must “remain on guard against the erosive influence of Western trends of political thought,” including constitutionalism and the separation of powers. Notably, the full text of the resolution, which reinforced Mr. Xi’s contention that “the East is rising while the West is declining,” was published on the same day as Mr. Xi held a virtual summit with U.S. President Joe Biden, whose administration has been aggressive in criticizing China’s human-rights record.

Mr. Xi’s message, according to Steve Tsang, director of the China Institute at SOAS University of London, is that he is on a historic mission to deliver China a future “that is much better than what ‘Western democracies’ have to offer.” 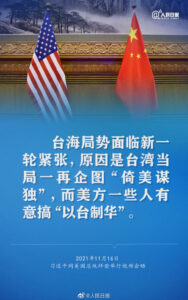 Xi used the occasion of this week’s US-China summit to question President Biden’s efforts to rally the world’s democracies, insisting that democracy is not ”mass-produced” in the form of a uniform model. “Engaging in ideological demarcation, camp division, group confrontation, will inevitably bring disaster to the world,” he added.

The claim that China is less driven than the Soviet Union to impose an ideological model on other countries has helped justify arguments that Beijing poses less of a challenge to democracies and is therefore less deserving of full-fledged systemic competition to defend open societies and individual rights, note Charles Edel, co-author of “The Lessons of Tragedy: Statecraft and World Order,” and David O. Shullman, senior director of the Atlantic Council’s Global China Hub.

But such differences should not lead analysts to discount the ideological challenge posed by Beijing’s unique approach. The Communist Party wants to undermine faith in democratic governments and popularize China’s authoritarian model, they write for the Washington Post.