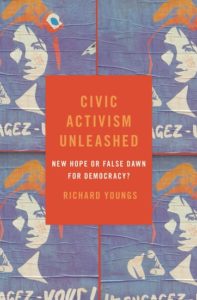 Seventeen Sudanese and international civil society groups* have urged the African Union to take action after militiamen attacked protesters at the sit-in in front of the military headquarters in central Khartoum earlier this week, reports suggest:

In a joint letter on Thursday, the organisations appeal to the AU Peace and Security Council and Moussa Faki, Chairman of the AU Commission to condemn the use of force to disrupt protests and the suspension of negotiations, and urge the parties to resume and conclude their dialogue without delay.

A bipartisan, bicameral group of 92 U.S. lawmakers today sent a letter to Secretary of State Mike Pompeo and Secretary of the Treasury Steven Mnuchin expressing deep concern about the current situation in Sudan and urging support for a rapid transfer of power to a civilian-led transitional government.

In his new book, Civic Activism Unleashed: New Hope or False Dawn for Democracy?, scholar Richard Youngs charts the global transformation of political and civic activism, highlighting its innovative new forms and often dramatic impact, even in the face of widespread efforts by governments to limit civic and political space, Carnegie observes. A forthcoming event will combine a global overview of trends in activism with focused insights on recent developments in Algeria and Sudan by two notable regional experts, putting the global overview into sharp topical perspective.

*Including partners of the National Endowment for Democracy.