Democracy faces a global crisis, according to a leading analyst. Over the past decade, one in six democracies has failed. Today only a bare majority of the world’s larger states remain democracies. Nor do the numbers capture the full extent of the danger, says Stanford University’s Larry Diamond.

Behind the statistics is a steady, palpable corrosion of democratic institutions and norms in a range of countries. China, Russia and their admirers are making headway with a new global narrative, hailing strongman rule—not government by the people—as the way forward in difficult times, he writes for The Wall Street Journal:

In earlier reverse waves, military coups were the main method of the democratic recession. Not today. The death of democracy is now typically administered in a thousand cuts. In one country after another, elected leaders have gradually attacked the deep tissues of democracy—the independence of the courts, the business community, the media, civil society, universities and sensitive state institutions like the civil service, the intelligence agencies and the police. Whether the agent of destruction is a right-wing nationalist like Vladimir Putin in Russia or a left-wing “Bolivarian” socialist like Hugo Chávez in Venezuela, the effect is the same: The structures and norms of democracy are eviscerated, one by one, until all that is left is a hollow shell.

In June 1982, President Ronald Reagan delivered a historic speech at the British Parliament in which he became among the first to recognize that a “democratic revolution” was sweeping the world—and that it deserved U.S. support, Diamond adds. The next year, with unusually bipartisan support, Congress established the National Endowment for Democracy (where I have long served as an adviser).

Other observers suggest that anxiety over the future of democracy may be misplaced. Public support for democratic ideals remains strong, and by one measure, global democracy is at or near a modern-day high, according to the Pew Research Center’s Drew DeSilver (see below).

But in one country after another, elected leaders have gradually attacked the deep tissues of democracy, argues Diamond.

“We can still reverse these ill winds,” he adds. “We can even help generate a new burst of freedom in the world. But it will not happen without vigorous American leadership—to support democrats, pressure autocrats and counter the malign expansion of Russian and Chinese power.” 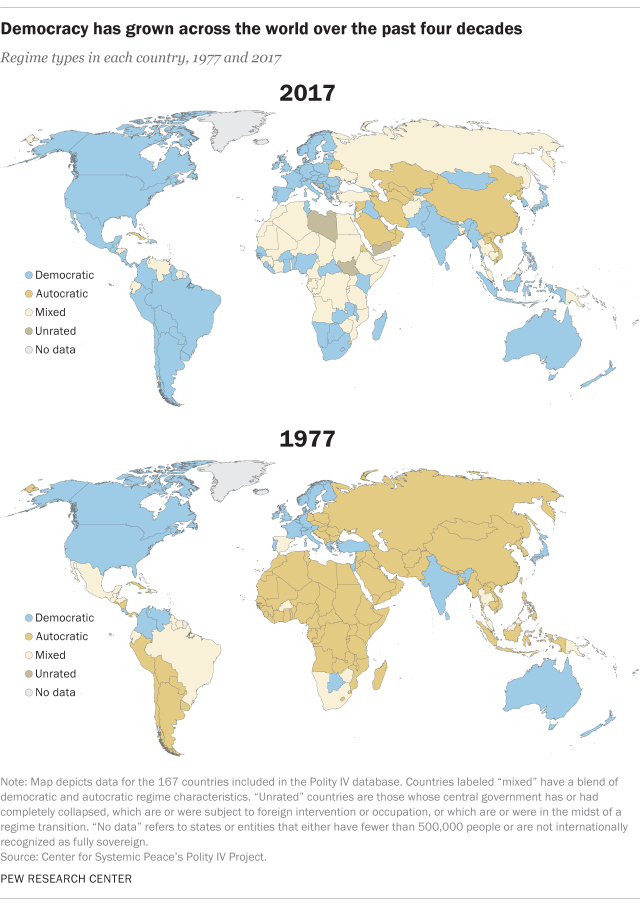 Prof. Diamond is a senior fellow at the Hoover Institution and at Stanford University’s Freeman Spogli Institute for International Studies. This essay is adapted from his forthcoming book “Ill Winds: Saving Democracy From Russian Rage, Chinese Ambition, and American Complacency,” which will be published June 11 by Penguin Press.