A study by the German Economic Institute, a Cologne-based think tank, noted that support for democracy generally grows the longer people live under such a system. But, the study said, surveys show support for democracy has fallen in ex-communist Eastern European countries since 2006. To explain the difference, the researchers cited data showing that the extent of corruption in Eastern Europe has almost doubled over the same period. 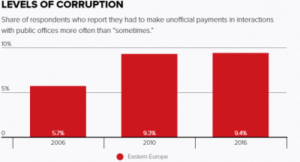 “The increased experiences of corruption in these states undermine the support for democracy,” they said in their report. “Only in the absence of corruption can the experience of democracy have its full effect on pro-democratic attitudes.”

The European Commission castigated Romania for regressing in its anti-graft reforms, but generally praised Bulgaria for meeting its commitments in two separate annual reports on the administration of justice released Tuesday, the Organized Crime and Corruption Reporting Project (OCCRP) reports:

When they acceded to the European Union in 2007, both Eastern European nations were required to sign up to the Cooperation and Verification Mechanism (CVM), a program that establishes specific benchmarks for reforms and monitors their implementation.

The reasons for the failure of democracy to take hold in Russia and for its current backsliding in Central Europe are complex, but one important and often neglected factor is what Ivan Krastev in a July 2018 article in the Journal of Democracy called “Imitation and Its Discontents.” 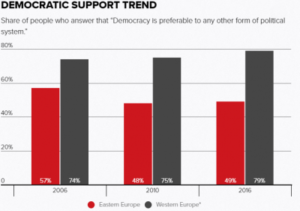 Following the collapse of communism, the countries in the region faced both internal and external pressure to “imitate the West” by adopting many of its democratic institutions and norms, he told a recent meeting at the National Endowment for Democracy (above). Despite the advantages this may have brought, it also has generated feelings of a loss of sovereignty and ushered in a period of growing malaise. As global authoritarian forces continue to rise, even the once seemingly consolidated democracies of Central Europe appear to be turning away from “Western” values of liberalism and embracing their own notion of “the real Europe.”

Is there a correlation between the experience of transition from communism to democracy and the current democratic backsliding in Eastern Europe? What is the role of civics in overcoming people’s disappointment from and distrust in democracy? How does civic education look like in countries with openly anti-democratic governments? Who comprises the generation of transition and is it any different from other generations in Eastern Europe?

Motivated by the 25th anniversary of 1989, a group of practitioners and academics from the former East Bloc countries convened in 2014 to reflect upon the impact of communism and transition on East European societies at large and specifically on the “generation of transition” – defined as the generation born between 1975 and 1995 which came to adolescence in the challenging years of hope, high expectations and deep transformations, notes the Sofia Platform.