A coalition of civil society organizations is calling on Facebook to provide a mechanism for all of its users to appeal content restrictions, and, in every case, to have the appealed decision re-reviewed by a human moderator.

The CSOs want CEO Mark Zuckerberg to endorse the Santa Clara Principles on Transparency and Accountability in Content Moderation, which recommend a set of minimum standards for transparency. The recommendations are consistent with the demand of UN Special Rapporteur on the promotion of the right to freedom of expression and opinion David Kaye, for a “framework for the moderation of user- generated online content that puts human rights at the very center.”

The initiative coincides with an insistence by democratic leaders that governments “must act now to protect our access to independent, pluralistic, facts-based information, which is essential for people to freely form their opinions and play an active and constructive role in democratic debates.” The leaders commend the work of the International Information and Democracy Commission, which presented the results of its work at Sunday’s Paris Peace Forum.

The challenges that technological change and the communications revolution pose to democracies was the focus of a Hoover Institution panel discussion moderated by former U.S. Secretary of State and Hoover senior fellow Condoleezza Rice, the third in its “Governance in an Emerging New World” series, led by former Secretary of State George P. Shultz, The Stanford Daily reports.

According to [‘Soft Power’ author] Nye, while authoritarian regimes like China and Russia may use “network sovereignty” – claims to exert control over certain network and cyberspace boundaries – to justify censorship and provide Internet stability in the short run, the centralization of information in this way would prove unsustainable in the long run.

“If something unpredicted occurs, it’s not clear that the system that they’ve developed in China is going to be properly adapted,” Nye said. “Right now they have a tactical advantage, but I’m reluctant to say that authoritarians have the answer.” 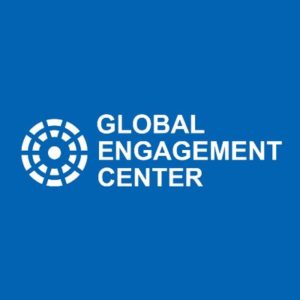 “These initiatives include deploying technology to provide early warnings of foreign disinformation, analyzing those foreign audiences that are most susceptible to disinformation, developing partnerships with key local social media influencers to produce content to reach critical audiences, and building the technical skills of civil society organizations, nongovernmental organizations, local influencers, and journalists to shed light on the spread of disinformation,” the spokesman said. 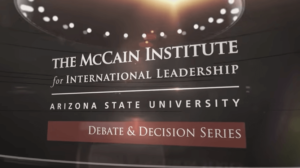 Georgia has seen a rapid spread of fake news, propaganda and false information. Largely behind this effort is Russia, as it seeks to sour public support towards the United States, Europe and democracy. As the only pro-U.S. country in the region, Georgia remains critical to American interests related to combating terrorism, ensuring energy security, and halting Moscow’s aggressive policies to turn back the clock in the region.

The program will be implemented in three phases:

“This project builds on the work of the McCain Institute to advance Georgia’s democracy by helping civil society, media, and the government to identify social media driven disinformation campaigns that may threaten Georgia’s security and stability,” said Fron Nahzi, Senior Director of Global Development, and Project Manager.

Truepic, a tech company focused on image authenticity, is launching a first-of-its-kind partnership with ASU’s Weaponized Narrative Initiative to push back on disinformation with authenticated images and videos, ASU reports:

When photos are loaded into the Truepic app, their patented technology verifies that the image hasn’t been altered or edited and watermarks it with a time stamp, geocode and other metadata. Truepic stores a version of the photo in its digital vault and assigns it a six-digit code and URL for retrieving it. Truepic also immediately logs the image or video onto the Bitcoin blockchain.

“It will allow you to know whether or not an image you’ve received is valid,” said Braden Allenby, founding co-director of the Weaponized Narrative Initiative. “The reason that’s important is that a lot of disinformation swirls around Ukraine, Syria, areas where combat makes it very difficult for the average person to know what’s real and what’s not.”

ASU and Truepic are associated with the State Department’s Global Engagement Center, which is charged with leading efforts to counter disinformation.

The Council of Europe has a valuable compilation of resources on dealing with propaganda, misinformation and fake news, including