Ten or even 20 years ago, the protests unfolding in Lebanon would have led news bulletins around the world—what is more compelling than large portions of the population of this small, schismatic, but strategic state united in optimism, standing together peacefully to overthrow decades of a dead-handed, morally bankrupt, sectarian kleptocracy? Fadlo R. Khuri, President of the American University of Beirut, writes for the Atlantic.

United in their calls to end corruption and kleptocracy, demonstrators are fueling a new era of unrest that has defied violent crackdowns and politicians’ appeals to stay home, Dion Nissenbaum writes for the Wall Street Journal. They are using lessons from the Arab Spring, maintaining a focus on reforms and trying to avoid the pitfalls that turned hopeful uprisings in Syria, Libya and Yemen into civil wars.

Iraq’s protesters object to the distortion of election results caused by the prevalence of backroom deals and the weakness of anti-corruption measures, notes Kirk H. Sowell, a political risk analyst and the publisher of the biweekly newsletter Inside Iraqi Politics. The same small group of factions controls every province, but they split the governorships. Even more, when a governor faces scandal or protests, he is replaced by another member of the kleptocracy, he writes for Carnegie’s Sada bulletin.

Around the region, dictators and kleptocrats continue to preside over young and restive societies, adds Danielle Pletka, senior vice president for foreign and defense policy studies at the American Enterprise Institute. Most of these leaders are better at filling prisons than delivering basic services or providing opportunity. Without a strategy to address this unrest, the region risks a repeat of the cycle of chaos that brought the Islamic State to power in the aftermath of the 2011 Arab Spring, she writes for the Post.

Corruption continues to devastate the world’s poorest and most vulnerable populations, but many overlook how it is facilitated by legal and financial loopholes in the West, the Hudson Institute observes. This imported corruption threatens democratic institutions and national security in the U.S. and Europe alike. At a forthcoming forum,* panelists will address how China, Russia, and other adversarial regimes exploit the global financial system for geopolitical ends and consider policy options to counter these threats.

Alex Gibney’s “Citizen K” (above), is a devastating portrait of corruption in Vladimir Putin’s Russia that seems to grow ever more timely, Variety reports:

It follows Mikhail Khodorkovsky, a former oligarch and ally of Putin who became an unlikely political dissident, risking everything to blow the whistle on the threat the Russian leader poses to democracy….Khodorkovsky was once among the richest men in Russia and in the world. He became an oil baron during the country’s privatization in the 1990s as it turned its back on communism and towards kleptocracy.

“After 2016, I became interested in Russia,” Gibney told Variety. “It seemed like a country we hadn’t paid enough attention to. I set out to find out how power works at the top in Russia and at the bottom, and came across Mikhail, who was sort of a dissident in exile.” 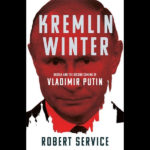 Vladimir Putin’s former KGB cronies, the siloviki, run the bureaucracy and the oligarchs who stole the Russian state in the most epic example of grand larceny in history support him, Victor Sebestyen notes in a Financial Times review of Robert Service’s Kremlin Winter: Russia and the Second Coming of Vladimir Putin. Service fills in plenty of new material about how the kleptocrats around Putin have made his family vastly rich.