In the absence of global democratic leadership, China is taking advantage of the Covid-19 pandemic to proclaim the superiority of its authoritarian model, notes Keith B. Richburg, director of the Journalism and Media Studies Centre at the University of Hong Kong,

But what seems more likely is a new world order with China cast as an international pariah, a regime that placed its own pride and prestige over transparency about a pending pandemic, he writes for the Australian Strategic Policy Institute (ASPI). The communist party’s cover-ups, suppression of information and dissemination of disinformation will likely have cost hundreds of thousands of lives and plunged the world into a colossal global recession. And its xenophobia and racism have been laid bare. 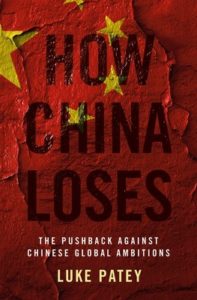 It is to no surprise that China’s media has been lackluster in improving its image among liberal democracies despite the scale of China’s propaganda campaign, says analyst Jo Kim. The CCP’s compulsion with “finding enemies and uniting the front” {as Luke Patey details in How China Loses…} created the “China-vs-all” scenario and thereby constricted partnerships. The purpose of propaganda is, after all, not to alienate the audience, he writes for the Diplomat.

Hao Jun, in his late forties, is one of a small but tight-knit group of dissidents based in Wuhan who took it upon themselves to document the earliest days of coronavirus, a period that has become a closely guarded secret by China’s Communist party, writes FT Beijing correspondent Don Weinland in a must-read account of what really happened in Wuhan.

According to the pro-Beijing South China Morning Post, owned by Jack Ma (owner of the firm Alibaba and a member of the Chinese Communist Party), the first case of COVID-19 in Wuhan, China, was confirmed on November 17, 2019. But according to the official website of the WHO, it first received a report from China about the virus outbreak on December 31, note Jianli Yang, founder and president of Citizen Power Initiatives for China, and Aaron Rhodes, president of the Forum for Religious Freedom-Europe, human rights editor of Dissident Magazine, and the author of The Debasement of Human Rights (Encounter Books, 2018).

Before that date, did the WHO receive or discover any other information about the outbreak? If so, what was the organization’s reaction? What did Chinese authorities say in their first report to the WHO? Can the public see that report? If not, why not? they ask in the American Interest.

Tsinghua University professor Xu Zhangrun offers a stinging indictment of China’s authoritarian system and its handling of COVID-19, in the latest issue of the Journal of Democracy (available free of charge until May 31). “The storied bureaucratic apparatus that is responsible for the unfettered outbreak of the coronavirus in Wuhan,” Xu writes, “repeatedly hid or misrepresented the facts. . . . Their behavior has reflected their complete lack of interest in the welfare and the lives of normal people.”

The pushback against populism: In a special package, JoD contributors review the records and reflect on the prospects of opposition parties as they confront governing populists:

Also in this issue:

Journal of Democracy complimentary full access: In response to the COVID-19 crisis, Johns Hopkins University Press is making all Journal content available free of charge until May 31. Browse past issues at Project MUSE, and don’t miss the newly released April 2020 issue.