The populist threat to democracy “would be sure to grow” unless policy-makers address changes in the nature of employment and “rebuild the links among work, opportunity, and economic security,” according to a new report from the Council on Foreign Relations. 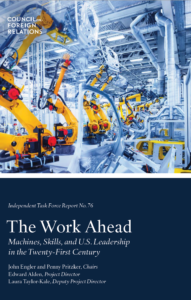 The world is in the midst of a transformation in the nature of work, as smart machines, artificial intelligence, new technologies, and global competition remake how people do their jobs and pursue their careers, say the authors of The Work Ahead: Machines, Skills, and U.S. Leadership in the Twenty-First Century.

“What is clear is that failure to meet the challenges posed by new technologies will likewise affect U.S. national security, in this case by increasing political pressures for American retrenchment, the consequences of which would be a more unstable and less prosperous world,” says CFR President Richard Haas says. “In such a situation, populism would be sure to grow, as would opposition to both immigration and trade despite their record of contributing to the country’s prosperity.”

Central Europe’s reintegration with the West and its commitment to democracy and the rule of law were signature foreign policy achievements in the post-Cold War era for the United States, the Center for Strategic and International Studies notes:

Increasingly, European and U.S. policymakers question whether Central Europe is really committed to democratic values and principles. Corruption, nativism, anti-Semitism, and weak institutions and civil society contribute to the drift of some NATO and EU members in Central Europe toward illiberalism. Please join a timely conversation* on Tuesday, April 17 on what policy tools Washington and Brussels can use to address democratic backsliding in Central Europe. 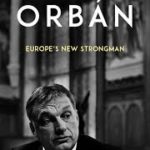 The case of Hungary demonstrates that “[w]e cannot take anything for granted anymore. What was once a theoretical collapse of a liberal democracy now has a proof of principle,” Andrew Sullivan writes for New York Magazine:

History is not over; and real, profound political choices are here again. My hope is that the descent into illiberalism across the West might shake up the rest of us in defending core liberal democratic principles, wherever they are threatened, bringing us to the ballot box in huge numbers this fall, and abandoning the complacency so many have lapsed into.

There are two things you need to know in order not to panic about Germany’s new far right; not yet anyway, according to Jeffrey Gedmin, senior fellow at the Atlantic Council and Georgetown University, and a senior advisor with Blue Star Strategies:

“There is a fluidity and volatility to all this,” Gedmin writes for the Hill. “Structural and cultural change is afoot. To oversimplify would be unwise; while complacency would be irresponsible — and perhaps outright dangerous.”

Progressives can’t cede civic patriotism and the nation state to right-wing populists, argues Michael Bröning, head of International Policy at the Friedrich-Ebert-Stiftung, a political foundation affiliated with the Social Democratic Party of Germany. To combat populism, progressives need to articulate an enlightened, patriotic ‘we’ – a progressive identity that doesn’t try to circle the wagons in ethnic terms but also doesn’t oppose European and global cooperation, he writes in an extract from the book Lob der Nation. Weshalb wir den Nationalstaat nicht den Rechtspopulisten überlassen dürfen (‘In praise of the nation. Why we can’t leave the nation state to right-wing populists’).

Populism is a global menace, notes Emilio Ocampo, a senior associate with the CSIS Americas Program. If populism continues to make advances in Western Europe and the United States, we may witness a breakdown of the global political and economic order established after World War II, he writes:

This in turn would lead to stagnation, financial instability, and possibly, increased geopolitical tension. In other words, we could see a replay of the 1930s. Maybe Argentina, which since December 2015 is trying to wean itself off a seven-decade harmful addiction to populism, can show the world how to cure this dangerous disease.

*”Democracies Under Duress: Are We Losing Central Europe?”