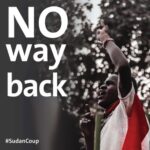 “Democracy is life,” said Akram Elwathig, a 29-year-old hospital worker with a toothy grin, who composes catchy chants and poetry to lead processions. “Right now, we are like the dead. So we have to go to the streets so that we can get our lives back.”

Sudan’s democracy movement does not have a single leader, relying instead on a decentralized structure in which individuals and communities organize their own events, The New York Times reports:

They announce protest dates and demands on social media, in pamphlets and through graffiti and murals scrawled on walls. A media committee shares plans through a unified Twitter handle, but individual committees also manage their own social media accounts…..The committees have grown to become a loosely networked, grass-roots movement, transcending class, age and ethnicity and spreading in both rural and urban areas…..

They first surfaced in 2013, said Muzan Alneel, a nonresident fellow at the Tahrir Institute for Middle East Policy [a partner of the National Endowment for Democracy – NED], with students and opposition activists mobilizing to protest rising gas prices. Then in 2018, after the popular uprising against Mr. al-Bashir, the Sudanese Professionals Association, a pro-democracy coalition of trade unions, helped raise their profile through a public call in order to spread the demonstrations countrywide.

“The military wish they were dealing with a few political parties and elites, and not this large network of people all over the country,” Alneel added.

Viewed in the context of the Biden Administration’s foreign policy agenda, a democracy, human rights, and governance (DRG) strategy for Sudan could be a case study for turning democracy promotion ideals into actionable policy, according to former NED staff Joseph Tucker, USIP’s senior expert for the Greater Horn of Africa.

It is  time for international actors to stop pulling punches on Sudan, argues Dave Peterson,  Senior Director of NED’s Africa Program and author of “Africa’s Totalitarian Temptation: The Evolution of Autocratic Regimes.” Targeted sanctions, seizure of assets, prosecution by the ICC, and material support for Sudan’s democratic movement are imperative, he wrote for Just Security.