Today, 376 million people live in deeply unfree countries—including Russia, Kazakhstan and the Gulf states—that have per capita incomes above $20,000 in terms of purchasing-power parity. In China’s coastal region, average incomes have already risen above this level, and the major cities have surpassed $35,000. When China as a whole crosses above $20,000 in per capita income, which the IMF estimates will happen next year, 1.8 billion people around the world will live in upper-income authoritarian regimes.

This development carries enormous implications for the future of democracy, say Foa and Mounk, contributors to the NED’s Journal of Democracy: 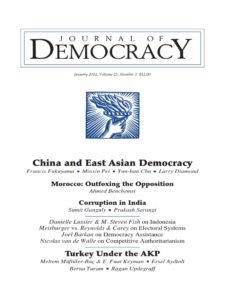 Whether democracy or autocracy rules the world in the 21st century is thus likely to depend on a number of pivotal countries that could end up as part of either camp. If countries such as India, Nigeria and Indonesia manage to build stable and affluent democracies, the principles of liberty and equality have a chance to maintain and extend their influence in the coming decades. But if these crucial “swing states” turn autocratic while becoming rich, democrats will have a harder time making their case.

Democratic governments are good for justice and bad for the economy, while competitive markets are just a good thing. Or perhaps it is the other way around. The debate on the relationship between electoral politics and rising standards of living is long-standing and has a new urgency, says Reuters analyst Edward Hadas. Torben Iversen and David Soskice’s “Democracy and Prosperity: Reinventing Capitalism through a Turbulent Century” persuasively argues that the two are mutually supportive, he writes:

“What ultimately makes advanced democratic capitalism resilient in the face of technological change and the rise of the populist challenge is the continued expansion of education combined with opportunity in the advanced sectors,” Iversen and Soskice conclude. “Only in an extreme crisis like the Great Depression is there a serious risk that populism may grow so widespread that the foundations of both advanced capitalism and democracy will come under attack.”