Western populism is impossible to understand as a direct result of domestic problems. Rather, it is a reaction to the global redistribution of power that is still taking shape, argues Bruno Maçães, a senior fellow at the Hudson Institute and a former Europe minister of Portugal. In politics as in physics, for every action there is an equal and opposite reaction. As what used to be called the Third World acquires the ability to change political and economic outcomes in the West, voters and political parties will increasingly call for an organized response to stop, minimize, or at the least control that influence, he writes for Foreign Policy.

Over the past generation, party systems in Europe have changed radically as new parties on the left and especially the populist right have increased their vote share at the expense of traditional parties of the center-right and center-left, notes Sheri Berman, professor of political science at Barnard College, Columbia University.

The decline of the latter has been particularly dramatic. In some European countries, social democratic parties have practically disappeared from the political scene, and even in former strongholds like Germany and Scandinavia their vote shares are at historic lows. The fate of social democracy should worry not only those on the left, but anyone concerned with democracy in Europe, she writes for Vox:

On the left, meanwhile, new-left parties like La France Insoumise and Podemos as well as major European intellectuals like Wolfgang Streeck and Thomas Piketty have brought democratic socialist and even Marxist critiques of capitalism back to the fore, questioning whether democracy and capitalism are compatible. Streeck, for example, forthrightly asserts that “there is an inherent conflict between democracy and capitalism” and that it is a “utopian” fantasy to believe they can be reconciled.

Europe has been the ground zero of democracy’s triumph. But will it be short-lived? The FT’s Edward Luce asks. It has been roughly half a millennium since Europe emerged from the Middle Ages and began its restless journey into the modern age. In most of Europe, liberal democracy has existed for less than a fifth of that time, he writes for Democracy: A Journal of Ideas:

In some parts of the continent, notably in eastern and central Europe, liberal democracy was established only in 1989 when the Iron Curtain was lifted. Many of those countries were under Hapsburg, Nazi, and then Soviet rule far longer than the non-European world had been colonized. Little wonder that countries like Hungary, Poland, and the Czech Republic are among the least stable—or most “illiberal”—of the West’s democracies. But the most troubling symptoms of decay are to be found in the oldest democracies of all—Britain and the United States. It is no coincidence that these are the two that have shown the sharpest rise in inequality among Western democracies

For those who believe that capitalism is necessary to ensure the economic growth and separation of economic and political power that healthy democracy requires, the growth of voices that lack a commitment to one or the other or do not believe they can be reconciled should be worrying, adds Berman, a contributor to the National Endowment for Democracy’s Journal of Democracy, whose latest book is Democracy and Dictatorship in Europe: From the Ancien Régime to the Present Day (2019).

But if capitalism and democracy are such uneasy bedfellows, what explains their long co-existence in the rich world? The Economist asks.

In their recent book, “Democracy and Prosperity”, Torben Iversen of Harvard University and David Soskice of the London School of Economics argue that in advanced economies democracy and capitalism tend to reinforce each other, potentially mutually supporting, with three stabilizing pillars that enhance democratic resilience, it adds:

“When there is a mismatch between citizens’ demands and expectations and the willingness or ability of political institutions to respond to them, the outcome is disorder and instability,” Berman concludes. 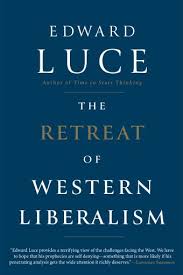 Her richly textured work of political history reminds us of timeless verities, adds Luce,  author of The Retreat of Western Liberalism:

Elites must share power to protect themselves. Capitalism has to be inclusive to survive. The privileged classes should pay heed to the needs of those less fortunate. To invert Barrington Moore, “Bad Bourgeoisie. Endangered democracy.” Because we are human, we are prone to forget such truths. We do so at our peril.  RTWT