While a recent global initiative cautioned that autocrats are exploiting the pandemic to erode democratic values and institutions, COVID-19 may yet allow the “re-imagining and strengthening of democracy” through innovative new practices and technologies, a new report suggests.

Over the past seventy-five years, democracy and freedom have expanded, a smaller percentage of people have been killed in war than in any other period in modern history, and the world’s wealth has grown like never before, primarily as a consequence of a Western-led and -designed international order, notes an analysis launched today by the Atlantic Council (above).

The global balance of power has since shifted away from the United States and Europe toward Asia. Technology, such as social media, enables the rapid mobilization of protest movements, while artificial intelligence gives authoritarian governments new tools with which to control populations. To accommodate these new players, powers, and influences, it is necessary to revitalize and adapt a rules-based system that has served the world for so long before the gains are lost, according to A global strategy for shaping the post-COVID-19 world.

Echoing the concerns of a recent call by global leaders to Defend Democracy, the report warns that “autocrats are exploiting the COVID-19 pandemic to strengthen their grip on power, ostensibly to ‘protect’ their people, but there is also an opportunity to strengthen democracy,” it adds.

“Internally, democracies must assess where they have fallen short of their ideals and recommit to them. In addition to expanding freedom at home, this effort will improve their ability to unite amid crises and strengthen their moral authority vis-à-vis autocracies,” they contend, citing recent instances of democratic innovation:

COVID-19 may allow the re-imagining and strengthening of democracy with new practices and technologies. The pandemic should not become a legitimate excuse to cancel or postpone elections or otherwise inhibit democratic practices. To ensure that campaigning and elections can continue even with social distancing practices in place, the free world should update democratic practices for the twenty-first century. ….With any luck, updated democratic practices also may strengthen pro-democracy movements and weaken existing autocratic governments in closed societies.

In the international arena:

“Moreover, greater unity will strengthen democracies as they engage with revisionist powers that seek to disrupt the rules-based system or replace it entirely,” they add.

The report echoes the concerns raised in “A Call to Defend Democracy”, a recent Open Letter initiated by the Stockholm-based International IDEA and the US-based National Endowment for Democracy, signed by some 73 pro-democracy institutions and a roll call of global leaders, including 13 Nobel Laureates and 62 former heads of state and government.

Accordingly, the report makes a number of recommendations to renew and revitalize democratic institutions, including: 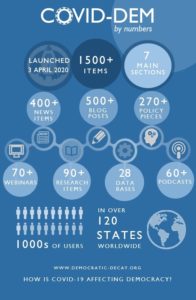 1: GREAT ACCELERATOR DOWNWARDS: The United States, Europe, and China all struggle to recover despite major fiscal and monetary efforts….

2: CHINA FIRST: China is not fully recovered, but its leadership sees an opportunity to undermine Western liberal democracy’s credibility by expanding assistance with increased soft loans and more infrastructure projects. “Belt and Road-type” deals are expanded to more states in Asia, Africa, and Latin America, giving Beijing ownership over critical infrastructure in more countries. At home, the CPC is successfully bolstering public support by portraying Western democracies as unable to deal effectively with the pandemic. …

3: NEW RENAISSANCE: As the global economy collapses, G7 and G20 leaders with a new
US leader at the helm rise above nationalistic impulses and forge an agreement on a coordinated recovery plan, including the lifting of border closures and relaxation of tariffs and other trade barriers…. 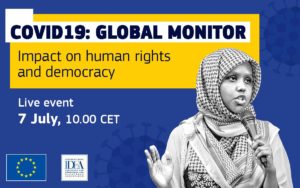 That analysis in turn follows an earlier ACUS report – Taking Stock: Where are Geopolitics Headed in the COVID-19 Era? – which observed that democracies “have the capacity to address outbreaks, facilitate cooperation, and avoid the baser influences of authoritarian states.”

“In the end, transparency is a major attribute in stemming fast-breaking global health crises, and democratic countries led by the United States, therefore, have an advantage over authoritarians who suppress and destroy important health data,” the report states.

International IDEA today joined Varieties of Democracy (V-Dem), Democratic Decay & Renewal (DEM-DEC), the Westminster Foundation for Democracy (WFD), the Centre for Civil and Political Rights (CCPR), the University of Oxford’s Blavatnik School of Government, and the International Centre for Not-For-Profit Law (ICNL) and European Centre for Not-For-Profit Law Stichting (ECNL) to launch (above) the Global Monitor of COVID-19´s Impact on Democracy and Human Rights. The one-stop platform facilitates public access to knowledge, information, data, analysis and policy guidance produced by International IDEA and other trackers of democratic rights on the implications of measures adopted by governments in the context of the COVID-19 pandemic.

The COVID-DEM Infohub (above) has been established as an information repository to help democracy analysts worldwide track, compile and share information on how state and government responses to the coronavirus (COVID-19) are impacting on democratic governance. It complements the Global Monitor by providing access to the latest global knowledge on democracy and COVID-19.

Garry Kasparov and Uriel Epshtein of the Renew Democracy Initiative discuss authoritarian regimes usurping democracy across the globe with Alexander Heffner, host of The Open Mind. 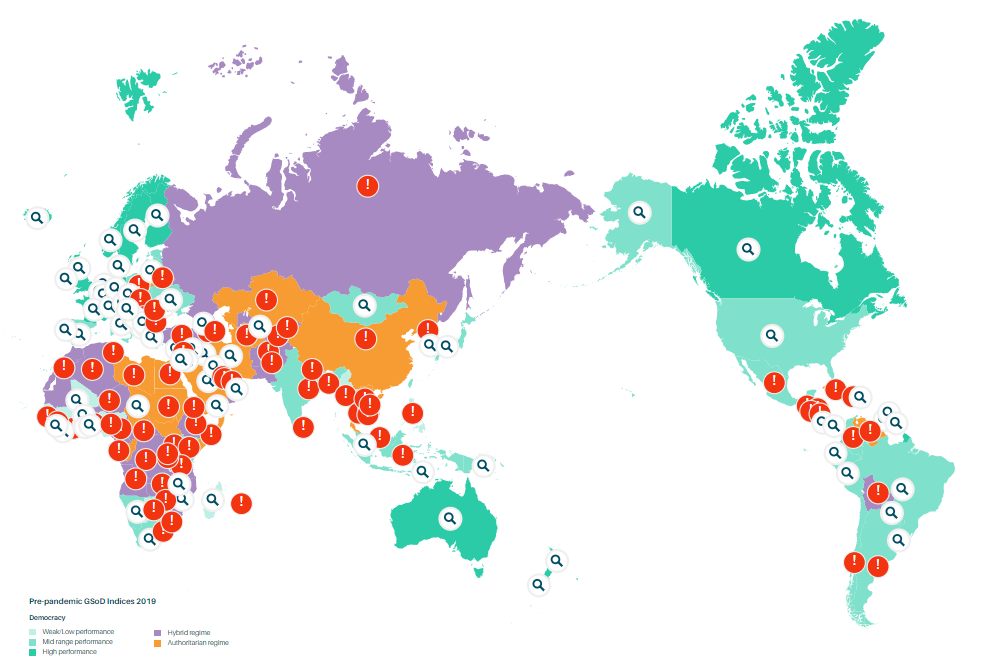