Meduza journalist Ivan Golunov’s release from house arrest does not imply a softening of the Kremlin’s stance toward civil society or a strengthening of its fight against corruption, Russia analysts suggest. Authorities just a day earlier sentenced well-known activist Leonid Volkov to 15 days in jail for organizing a rally, RFE/RL reports.

“The problem here is that this kind of success as in the case of Golunov is isolated. They don’t accumulate to fundamentally change the system,” Maria Snegovaya, a fellow at the Center for European Policy Analysis and a Penn Kemble fellow at the National Endowment for Democracy, told RFE/RL. 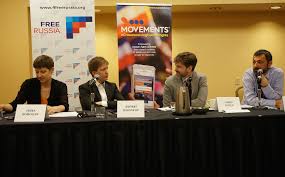 Russia would be a democracy, its government accountable to its citizens and the world would not have to contend with its malign influence if its civil society was free, a Capitol Hill meeting heard yesterday.

Russia abuses freedoms in the West, supports brutal dictators in Syria, Venezuela, and Sudan through covert means and suppressed liberty at home, employing a range of measures, from the undesirable organizations law and drastic restrictions on assembly to administrative detention and political prisoners. But this entire machinery of repression has failed, said Miriam Lanskoy, Senior Director for Russia and Eurasia at the National Endowment for Democracy, the Washington-based democracy assistance group.

Russia is changing, she told a forum to launch the Free Russia Foundation’s report detailing the Kremlin’s attempts to influence Western judicial outcomes and its active measures campaigns against liberal democratic institutions.

“We are in a very important moment.  Which trend will be faster—the growth of the new, assertive civil society? Or the speed with which Russia clamps down on the internet?,” Lanskoy asked. “The protest wave of 2010-2012 is back, but more broadly spread across the regions and involving more people,” she added, citing protests by truckers, against pension cuts, and the “impressive mobilization” to release Golunov. The best of the lively independent news – investigations, YouTube shows, social media-driven news sites, such as Alexei Navalny’s and Yuri Dud’s Kolyma (below) – get millions of views, up to three times the viewership of state TV news, Lanskoy added.

An incipient Eurasian “democratic spring” may not yet be on the horizon, but political awareness and civil society are gaining ground, analysts suggest.

Recent polls show public trust in President Vladimir Putin has declined to 31 percent, and 45 percent of Russians say their country is going in the wrong direction, a 12-year high, according to RAND’s Denis Corboy, William Courtney, Kenneth Yalowitz. The popular tendency to defer to the center on political decisions also seems to be falling, they add:

These sentiments may be playing out in public protests, such as those across the country last year against raising pension ages, and last month in Yekaterinburg against plans to build a church in a beloved green space which led to its cancellation. Days ago some 7,000 people rallied in the Komi Republic against the “colonial politics” of creating of a landfill in nearby Archangelsk region for garbage from Moscow.

Transparency and accountability in the West, collaboration among allies, and building awareness and resilience are vital, but Internet freedom is fundamental, said the NED’s Lanskoy.

“The Kremlin’s efforts to control the Internet have been clumsy at times but are becoming more ominous,” she said. “Russia successfully installing a Chinese style model of control would be a fundamental and very harmful shift.  Supporting internet freedom would mean mobilizing  societal awareness and pushback to prevent that possibility.”

But the strategic priority must be supporting Russian civil society and democrats, said Lanskoy, like Natalia Arno and her colleagues at Free Russia Foundation. “If the Russian government became accountable to the Russian people and addressed their interests and priorities, we would not have to confront the Kremlin’s malign influence all over the globe,” she said.

As countries still struggle to overcome an authoritarian Soviet legacy, what does the historical record show? the RAND analysts ask: