Portuguese “immunity” to populism has been strong, compared to the trends in other European Union member states, Isabel Marques da Silva writes for Euronews:

“There is no party represented in Parliament that has such a speech, but we are not exempt from this possibility, especially since we know that in Portugal people are very disconnected from politics. They support democracy as an ideal regime, but they do not rely on the parties or, necessarily, on the rulers. Those doses of mistrust may one day be channeled by someone who has sufficient media status to do so,” he notes. 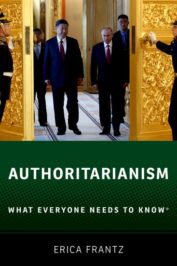 Observers are sounding the alarm bell that we are amid an era of resurgent authoritarianism as a number of developments give cause for concern for global democracy, notes Erica Frantz, Assistant Professor in the Political Science Department at Michigan State University, and author of Authoritarianism: What Everyone Needs to Know.

The first is the growing attractiveness of populism among democratic audiences, she writes for the OUP blog: