Colombia will increase protection for political candidates running in October’s local and regional elections after the murders of seven aspirants, said President Ivan Duque. The killings have sparked renewed calls for more to be done to prevent political violence in the country, where hundreds of community leaders and human rights activists have also been murdered, Reuters reports.

The hard-won 2016 peace accord between the Colombian government and the Revolutionary Armed Forces of Colombia, or FARC, is fragile. Implementation has been slow and in late August a sector of the FARC announced they had rearmed. Yet throughout the country, popular support for peace persists – people yearn for a different future. El Testigo (above) helps its viewers understand why, the Tom Lantos Human Rights Commission notes.

It’s doubtful there was ever a FARC commitment to peace. A better read is that the guerrillas took a deal that included amnesty and 10 unelected FARC seats in Congress, but that they had no intention of giving up the lucrative cocaine business or their dream of bringing down Colombia’s democracy, The Wall Street Journal suggests.

Civil society groups backed by the National Endowment for Democracy have sought to build the governing capacity of local governments and candidates in Colombia’s post-conflict zones. And others, like the Corporacion Transparencia por Colombia, work to strengthen citizens’ capacity to expose and counter corruption while fostering collaboration among youth through an anti-corruption network. 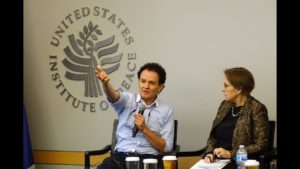 Photojournalist Jesús “Chucho” Abad (left), born in 1967, focuses his work on human rights and armed conflict, the Lantos Commission adds. El Testigo documents the trajectory of Colombia’s brutal internal armed conflict through the lens of his camera, capturing the magnitude of the violence and the suffering it has wrought. Years later, Abad returns to search for the subjects of his photographs and talks to them about their lives and their opinions of his work. Their narratives reveal the tragedy of the conflict and their hope for forgiveness and reconciliation.

Please join the Tom Lantos Human Rights Commission for a screening of the Colombian film El Testigo (The Witness) followed by a discussion with the film’s protagonist, Jesús Abad Colorado. The 73-minute film, produced by Caracol Television in Colombia, is in Spanish with English subtitles.

This screening will be open to Members of Congress, congressional staff and interns, the interested public, and the media. For any questions, please contact Kimberly Stanton at 202-225-3599 (for Co-Chair McGovern) or Piero Tozzi at 202-225-3765 (for Co-Chair Smith).