Over the decades, Georgians have made great strides in moving toward a truly democratic, European nation, despite daunting challenges — not least from Russia, which invaded in a brief but vicious war in 2008 and still occupies 20 percent of Georgian territory, notes David J. Kramer, a senior fellow in the Vaclav Havel Program for Human Rights & Diplomacy at Florida International University’s Steven J. Green School of International & Public Affairs.

Yet now pro-Russian forces are on the rise, he writes for The Washington Post:

A group of leading civil society organizations recently issued an open letter bemoaning the “dire state of affairs” and “democratic backsliding and state capture,” as well as the “concentration of power in the hands of the ruling political party, thus dangerously undermining the balance of power and the viability of institutions.”

A recent poll conducted by the International Republican Institute shows that a majority of Georgians see Russia as Georgia’s greatest political and economic threat, while 52 percent of respondents criticize the government for its perceived soft handling of the relationship with Moscow. 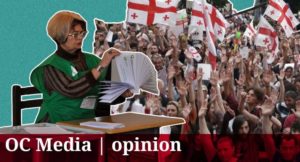 Georgians continue to demonstrate ‘resilient support’ for the country’s European and Euro-Atlantic goals, with 78 per cent approving EU membership and 71 per cent NATO membership, according to recent polls (above) from the National Democratic Institute, IRI’s sister organization in the democracy support field [both NDI and IRI are core partners of the National Endowment for Democracy].

“Some supporters of Georgia are reluctant to criticize the recent developments, fearful that doing so will lead Western leaders to lose interest in this island of democracy,” adds Kramer. “In fact, Georgians deserve to have their international friends speak truth to power and stand with them against those threatening to take the country in the wrong direction.”