With Hong Kong’s society increasingly polarized by the ongoing unrest, external actors, including the U.S. Congress, the administration, and the legal and NGO community, can take steps to advance human rights and the rule of law, according to a new report.

Human Rights First today released “Hong Kong’s Fight For the Rule of Law”, a new analysis based on firsthand interviews with Hong Kong lawyers, law students, academics, and other civil society figures, outlining how the U.S. government and other actors should respond to the crisis. 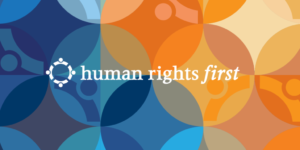 Civil society leaders stressed the need for action from the United States, including through the passage of the Hong Kong Human Rights and Democracy Act of 2019 and the PROTECT Hong Kong Act, the report explains.

“Government officials often complain that it’s hard to identify the good guys in a foreign conflict. In Hong Kong, it’s simple—the good guys are those protesting for human rights and democracy. Members of Congress should listen to them, visit them, and pass laws to support them,” said Brian Dooley, the report’s author.

U.S. actors are embracing the Hong Kong struggle, but there’s no sign that Chinese President Xi would ever entertain allowing the political reforms sought by the protesters, The Washington Post’s Ishaan Tharoor suggests:

In his years in office, Xi has built a legacy of ruthless power consolidation, purging party foes, squeezing the space for civil society and exporting China’s technologies of control to countries around the world. Under his watch, more than a million Turkic Muslims in the far-west region of Xinjiang have vanished into detention camps. Hong Kong’s pro-democracy champions see themselves holding the line against an increasingly totalitarian advance. 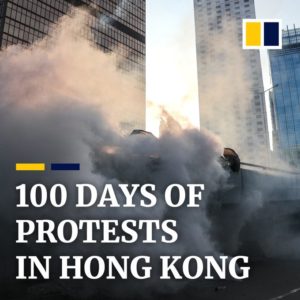 Sharon Hom, executive director of Human Rights in China, invoked a saying by Mao Zedong to sum up the spirit of Hong Kong’s dissenters: “Wherever there is suppression, there will be resistance,” Tharoor adds.

Hong Kong labor leader Lee Cheuk-yan, unlike most Americans, remembers and reveres Lane Kirkland, a hero of the first Cold War. During 16 years as leader of the AFL-CIO (1979-1995), Kirkland gave crucial support, both material and moral, to Lech Walesa and the Solidarity movement in Poland, where it was an early tremor in the political earthquake that ended European communism. But Lee is lending support to a fluid, shape-shifting protest movement that has no Walesa, George Will writes for The Washington Post:

This lack is a strength and a weakness. The movement has no leader with whom the local government, which is an appendage of Beijing — and, hence, of the Chinese Communist Party — might negotiate. Fortunately, however, a movement without a head cannot be easily decapitated, which otherwise probably would be Beijing’s default position.

Lee was in a hotel overlooking Tiananmen Square when the tanks rolled in. He later organized Hong Kong’s memorial museum, which is overseen by the same organization that facilitates commemorations every June 4. As a human bridge between the first Cold War and the next one, he knows that this city today is not like East Berlin in 1953, or Budapest in 1956, or Prague in 1968. In those places, people who were in despotism’s firm grip rebelled and quickly learned how firm the grip was. 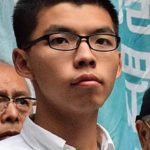 “Hong Kong is just similar as East Berlin in the last century under authoritarian rule,” argues democracy advocate Joshua Wong. (right). “Now is the time for us to fight back. Let the world know that we are the ones standing in the forefront to confront Beijing suppression,” he tells ABC reporter Sophie McNeill in a must-view report (above).

Wong and Brian Leung have been two of the movement’s most vocal leaders, the Council on Foreign Relations adds. Wong serves as the Secretary General of Demosistō, a Hong Kong pro-democracy political party, and Leung garnered attention for removing his face mask while leading protests inside the Hong Kong Legislative Council in July 2019.

In mid-September, Wong and Leung traveled to the United States to meet with U.S. officials to press their case. In this podcast, they sit down with CFR’s Dr. Elizabeth Economy to discuss the roots of their political activism, their thoughts on the protest’s current status, and their goals for their tour abroad.

The international community and Hong Kong’s business community both have influence in how things can play out politically in the future, says analyst Hugh Bohane. In the meantime, it seems unlikely that the four outstanding demands from pro-democracy protesters — an independent inquiry into allegations of police brutality, amnesty for arrested protesters, the right of Hong Kongers to elect their own political leaders, and an edict against describing the protests as “riots” — will be met any time soon, he writes for The Diplomat.

Hong Kong, unlike Iraq, has a vibrant democratic culture and civil society, adds Will, What is required of U.S. policy is not “nation building” but sustaining the reality of a polity that, without claiming or seeking nationhood, simply refuses to be absorbed into the domain of an increasingly nasty regime. RTWT