Democracy and human rights advocates are mourning the passing of Jose Luis Martin “Chito” Gascon, chairman of the Philippines’ Commission on Human Rights, who succumbed to COVID-19 at the age of 57.

Sa dami mong Laban, sa covid pa tayo na talo! 😪🙏 “Of all your many battles, it’s covid that defeated us. Love you, brother,” his brother wrote on Facebook.

Prior to his leading the CHR, he was a member of the Human Rights Victims Claims Board, the body tasked to receive, evaluate, and investigate reparation claims made by victims of human rights violations during Martial Law, CNN reports. The human rights lawyer and political activist was also the youngest member of the Constitutional Commission that drafted the 1987 Constitution, as well as the 8th Congress. 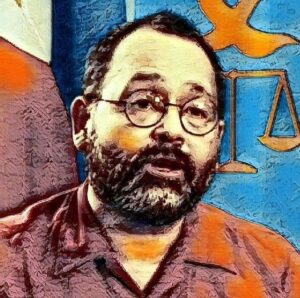 A “constant light in dark times,” Gascon was among the student leaders who fought the Marcos dictatorship. As chair of the University of the Philippines Student Council, he led the youth movement that participated in the People Power Revolution that restored democracy, adds Rappler.

“Democratic forces should be able to overcome pushback of autocrats if we pursue a systematic and coordinated counter strategy as outlined in the document ‘A Call for Democratic Renewal,’” he told the World Movement for Democracy’s 2015 Assembly in Seoul, South Korea, drawing on the Philippines’ experience:

Gascon supported the investigation of the International Criminal Court (ICC) into Duterte’s war on drugs that killed thousands of impoverished Filipinos, accused of using illegal drugs. Independent investigators, journalists and witnesses have said that many of the victims were unarmed, or were innocent of the crime.

Duterte responded with vicious sexual innuendo, Al-Jazeera adds. Gascon deflected the “name-calling” and the “hurtful language”, telling ABS-CBN News that he hopes the president “might choose to withdraw them in order to have a common civic space,” stressing that his role at the CHR is “part of the checks and balance system of Philippine democracy”. 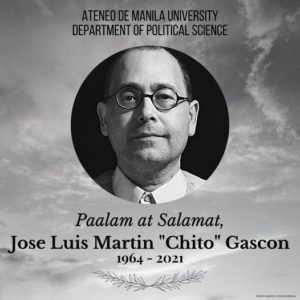 In an interview on Esquire Philippines in 2017, he remained undaunted by the constant criticism of the CHR by those in halls of power and on social media, the University of the Philippines adds.

“Right now, in a sense, I’m going back to basics. I was moved into action by the human rights violations I saw happening during the dictatorship. And now I have been allowed to serve the people in an institution that is mandated to promote human rights, in a set of circumstances that are not ideal,” he said. “The revolution you aspire for is out there on the horizon. It’s something you never give up on.”

In 2005, he received a Democracy and Development Fellowship from Stanford University’s Center for Democracy, Development, and the Rule of Law. CDDRL’s Larry Diamond paid tribute on Twitter (below), noting that Chito was “eloquent, fearless, humble, and deeply devoted to democracy.” In 2007, he became a Reagan-Fascell Fellow at the National Endowment for Democracy (NED).

He was eloquent, fearless, humble, and deeply devoted to democracy. All of us at @StanfordCDDRL deeply mourn the loss of our friend and former Draper Hills Summer Fellow Chito Gascon, Chair of the Philippines’ Commission on Human Rights and one of its great civil society leaders. https://t.co/C0pKEzeXcH