Various groups in Hong Kong, including democracy activists, have objected to the proposed legislation, which would allow case-by-case extraditions from the city to countries without formal extradition agreements, including mainland China.

“The extradition bill could pose significant risks to U.S. national security and economic interests in the territory,” the U.S.-China Economic and Security Review Commission said in a report released on Wednesday.

The crackdown in Hong Kong is a cause for international concern, notes Jung Hoon Lee (right), South Korea’s former ambassador for human rights, a professor of international relations at Yonsei University in Seoul, and an international patron of Hong Kong Watch. As a citizen of a relatively young East Asian democracy—with the other half of our peninsula living under a barbaric totalitarian regime—I believe it is time to defend Asia’s world city, and make sure it continues to be worthy of that name, he writes for The Wall Street Journal.

Political reform is a necessary condition for addressing Hong Kong’s political problems, argues Richard Wong Yue-chim, the Philip Wong Kennedy Wong Professor in Political Economy at the University of Hong Kong. But more urgently, we must first answer whether we want a liberal or a populist democracy. Time may not be on the side of a liberal democratic solution, he writes for The South China Morning Post.

Embracing either Hong Kong localism or Chinese nationalism is not the way forward for a city that has long benefited from its unique mix of East and West. Hongkongers must move away from both extremes, analyst Brian YS Wong writes for The SCMP.

Harsh verdicts April 9 in Hong Kong for nine of the Umbrella Movement leaders make clear that Beijing’s grip is tightening over Hong Kong’s free society—including the judiciary.  Across the board, Hong Kong’s human rights environment is under serious pressure, with its core values and every pillar of civil society under assault.

In a new troubling move, Beijing is pushing to put in place an extradition law that could legalize disappearances and kidnapping of peaceful critics in clear violation of the Joint Declaration and Basic Law, the 1997 agreement that established the fifty-year guarantee of “one country – two systems.”

Veteran Hong Kong legislator Martin Lee is leading a diverse delegation of fellow democrats to Washington, DC to explain these new tactics and the threats they pose to the diverse elements of democratic civil society, including basic human rights, freedom of the press, freedom of religion, the democratic process, and the rule of law.

invites you to join a discussion of

and a conversation with leading Hong Kong Democrats 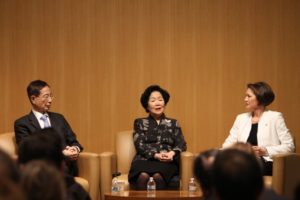 Former founding Chairman of the Democratic Party of Hong Kong, Martin Lee, and former Chief Executive of Hong Kong, Anson Lee, participate in a panel at the National Endowment for Democracy on April 2, 2014.

A light lunch will be served

Martin Lee is the founding chairman of the Democratic Party, Hong Kong’s flagship pro-democracy party. Known is the “Father of Democracy” in Hong Kong, he was an elected member of the Legislative Council from 1985 to 2008. He served as chairman of the Hong Kong Bar Association from 1980 to 1983 and took part in the discussions over Hong Kong’s 1997 handover from the United Kingdom to China, joining the Basic Law Drafting Committee in 1985. He continues to fight for democratic protections and is the territory’s top barrister and Senior Counsel taking on significant cases to protect the rule of law and the rights of political activists in Hong Kong.

Nathan Law is Demosisto’s founding chairman, and was the former secretary general of the Hong Kong Federation of Students. In 2016, he became Asia’s youngest democratically-elected lawmaker when, at age 23, he won a seat in the Hong Kong Legislative Council—before Beijing intervened and removed him from office. He was also one of Hong Kong’s first three political prisoners since 1997, sentenced in 2018 with Joshua Wong and Alex Chow for leadership roles in the peaceful protest “Umbrella Movement” in 2014.  Law recently graduated from Lingnan University in Hong Kong, and will be pursuing a masters degree in Asian Studies at Yale University in autumn 2019.

James To is the longest-serving member of the Hong Kong Legislative Council and of the Yau Tsim Mong District Council. He was first elected as a legislator in Hong Kong’s first democratic elections 1991 at the age of 28 as the youngest legislator—a record broken only when Nathan Law was elected in 2016 at the age of 23. Besides his duties as a legislator, James To is also currently a lawyer.

Lee Cheuk Yan is a veteran labor leader and is on the Executive Committee of Hong Kong Civil Hub. He was a former member of the Legislative Council of Hong Kong since 1995, representing the New Territories West constituency for more than two decades.  Lee worked for the Hong Kong Christian Industrial Committee since 1980, and in 1990 helped found the Hong Kong Confederation of Trade Unions, the independent Union Center in Hong Kong, and is its General Secretary. He co-founded and is Vice Chair of the Labour Party. He is Secretary of the Hong Kong Alliance in Support of Patriotic Democratic Movements in China, which organizes the annual candlelight memorial for Tiananmen Square—the only place the June 4, 1989 tragedy is recognized on Chinese soil.

Mak Yin-Ting has been a journalist in both print and electronic media for over 30 years.  She is the former Chair  of the Hong Kong Journalists Association and a co-author of the organization’s important annual report of freedom of expression in Hong Kong since the 90s. Mak began her career at the Hong Kong Daily News in 1984 as a reporter. Mak joined the Press Freedom Subcommittee at the Hong Kong Journalists Association in 1995. She has testified and spoken globally about the need to preserve press freedom in Hong Kong and was honoured in 2007 as a Champion of Freedom of Speech by the Visual Artists Guild.