After communism fell, the promises of western liberalism to transform central and eastern Europe were never fully realized – and now we are seeing the backlash, argue Ivan Krastev and Stephen Holmes, authors of The Light That Failed: A Reckoning.

No single factor can explain the simultaneous emergence of authoritarian anti-liberalisms in so many differently situated countries in the second decade of the 21st century. Yet resentment at liberal democracy’s canonical status and the politics of imitation in general has played a decisive role, they write for the Guardian:

This lack of alternatives, rather than the gravitational pull of an authoritarian past or historically ingrained hostility to liberalism, is what best explains the anti-western ethos dominating post-communist societies today. The very conceit that “there is no other way” provided an independent motive for the wave of populist xenophobia and reactionary nativism that began in central and eastern Europe, and is now washing across much of the world.

Canada’s 43rd federal election was a testament to the values of the international liberal-democratic order, one that has secured unprecedented peace and prosperity. But a growing culture of complacency puts these successes at risk, according to former justice minister and attorney-general Irwin Cotler and Brandon Silver, director of policy and projects at the Montreal-based Raoul Wallenberg Centre for Human Rights.

Great strides are being made in emerging democracies, such as post-velvet revolution Armenia, they add, but efforts to reverse democratic backsliding are an imperative that should be anchored in three core tenets: development, diversification and denunciation, they write for the Globe and Mail: 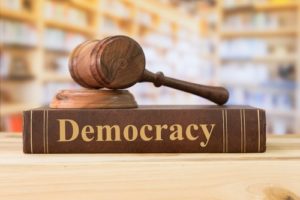 Some 1,200 democracy and human rights advocates and academicians, gathered at the 23rd Forum 2000 Conference in Prague (Oct 13-16), voiced a unified concern over the future of democracy, Jackie Abramian reports for the Daily Grit.

Carl Gershman, the president of the National Endowment for Democracy, underscored the proven resilience of democracy, noting how democratic transitions in Moldova, Armenia, Tunisia, Hungry, Poland, and others showed fully engaged protestors demanding their rights and a commitment to democracy. Yet this is unseen in the West.

“We need to re-ignite democracy in established democracies,” said Gershman (right), encouraging a democratic coalition to counter the authoritarian rules as in the dramatic events unfolding in Hong Kong.

By the end of 2019, more people will have cast a vote than ever before. Nearly 2 billion voters in 50 countries around the world will have headed to the polls to elect their leaders. At the same time, data show that citizens’ trust in governments is weak and political polarization is growing almost everywhere, Brookings observes:

Many are feeling left behind and find it hard to coexist with people who have different views. Social networks and echo chambers amplify this mistrust. Simultaneously, the world is getting richer, with just over half of the global population now middle class or wealthier. Many countries, ranging from autocracies to liberal democracies, are struggling to form political platforms that can satisfy a broad middle-class majority.

On October 31, the Global Economy and Development program at Brookings and the Center for the Implementation of Public Policies for Equity and Growth (CIPPEC) from Argentina will co-host an event to assess democratic trends in the developing world and tease out implications for growth and development, drawing from recent electoral results in Africa, Latin America, and South Asia. The event will kick off with a brief presentation on global attitudes toward democracy by the Pew Research Center (above & right). A moderated panel with regional experts will follow.