The war in Ukraine is raising particular concern in Taiwan where many see uncomfortable parallels with another authoritarian neighbor threatening a vulnerable democracy.

“What people in Taiwan are seeing is across the world, this relatively small democracy has been invaded by a much bigger country, an authoritarian neighbor, that claims sovereignty over it and claims a right to grab it, to invade it, based on a particular version of history,” notes NPR China affairs correspondent John Ruwitch. “You know, sitting in Taiwan, it’s really not hard to draw the parallel with China.”

On the other hand…..

“The determination and resilience that the Ukrainian people have shown in the wake of Russia’s invasion have inspired Taiwan, reinforcing our commitment to defend our freedom,” says Bi-khim Hsiao, the Taiwan government’s representative to the United States.

In recent years, we have undertaken a complete review of our self-defense capabilities, restructuring our training procedures, reserve forces and defense budgets to better prioritize asymmetric capabilities and to deter the People’s Republic of China from making the wrong calculation, as Russia did, he writes for The Post. Recent polls and surveys demonstrate increasing support among Taiwanese people for bolstering our self-defense. 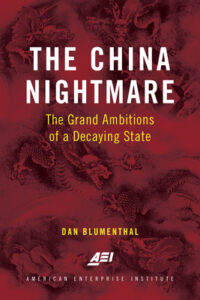 In its stance on Ukraine, China hasn’t miscalculated. It was right about the geopolitical fundamentals, says Dan Blumenthal, director of Asian studies at the American Enterprise Institute and author of “The China Nightmare: The Grand Ambitions of a Decaying State.”

And since few countries joined the West in resisting Russian aggression against a sovereign nation, Beijing may conclude that fewer still would punish it for an attack on Taiwan, which most of the world doesn’t recognize as a country, he writes for The Wall Street Journal:

Washington must urgently make a sustained diplomatic case to its partners that such an attack would devastate international security and prosperity. China doesn’t need allies to support its aggressive plans. It merely needs nations to stay neutral, and Russia’s invasion of Ukraine has given China more confidence that most of the world will stay on the sidelines.

Because of China’s global trade and overseas investments, targeted, coordinated sanctions could drastically hurt the Chinese Communist Party, which is heavily involved in the economy, argues Jeffrey W. Hornung, a senior political scientist at the nonprofit, nonpartisan RAND Corporation. Of course, China’s larger economy and greater integration with the world economy means that such steps might have a larger impact on some allied economies than the sanctions on Russia have had.

That said, Western countries should be prepared to take many of the same steps they have taken against Russia. These could include cutting off Chinese banks from SWIFT, sanctions on Chinese goods, and secondary sanctions on countries willing to trade with China, he writes for War On The Rocks.

Honored to meet Minister Wu in Taipei, a champion of democracy at home and abroad. Taiwan offers and inspires democratic solidarity. @NEDemocracy https://t.co/UPo6BBs289

Taiwan must learn from Ukraine and formulate a comprehensive and self-sufficient national security framework to defend against Chinese aggression, a British historian told a Taipei forum on Saturday.

Ensuring a country’s own defense was “the biggest lesson we can learn” from the ongoing conflict between Ukraine and Russia, Wang Hao said at the forum hosted by the pro-independence Taiwan New Constitution Foundation (TNCF). It is essential for the government to take action to strengthen military training, civilian-based defense, conscription, power grid resilience and information warfare, he added.

Damon Wilson, the president and CEO of the National Endowment for Democracy (NED), will meet with President Tsai Ing-wen on Tuesday. On Monday, he tweeted (below) a picture of Taipei 101, stating that he is “honored” to be in Taiwan, “one of the world’s most free societies” which “is becoming a hub for democrats to learn from each other in safeguarding their democratic way of life”.

Wilson will announce plans for the endowment to work with Taiwanese civic groups, like the Taiwan Foundation for Democracy, on the 11th Global Assembly of the World Movement for Democracy to be held on the island from Oct. 24-27 this year.

The CSIS China Power Project discussed Russia’s invasion of Ukraine and the potential lessons learned for Taiwan (above) with Mr. John Culver, former national intelligence officer for East Asia; Ms. Bonnie S. Glaser, director of the Asia Program at German Marshall Fund of the United States; Dr. Michael J. Green, senior vice president for Asia, Japan Chair, and Henry A. Kissinger Chair at CSIS and director of Asian Studies at the Edmund A. Walsh School of Foreign Service at Georgetown University; and Dr. Scott Kennedy, senior adviser and Trustee Chair in Chinese Business and Economics at CSIS. This event is moderated by Dr. Bonny Lin, director of the China Power Project and senior fellow for Asian security at CSIS.

Delighted to be partnering with @TFDemocracy on common democratic unity efforts including hosting @MoveDemocracy.

Taiwan’s solidarity with threatened democracies from Ukraine to Lithuania and its example at home are powerful contributions to the Free World. https://t.co/nfIIV1vmuV