Hungary’s ruling Fidesz party signalled on Monday it could push on with legislation to crack down on organisations promoting migrant rights as soon as parliament reconvenes after Prime Minister Viktor Orban’s sweeping election victory. A bill submitted to parliament before the election would impose a 25 percent tax on foreign donations to NGOs that the government says back migration in Hungary, Reuters reports: –

Their activity would have to be approved by the interior minister, who could deny permission if he saw a “national security risk”. Last month, Orban told state radio the government had drafted the bill because activists were being paid by Soros to “transform Hungary into an immigrant country”. Soros has rejected the campaign against him as “distortions and lies”.

Analysts at Hungarian think tank Political Capital [a National Endowment for Democracy grantee] said Orban’s election landslide reflected the success of his efforts to consolidate power around Fidesz, which controls state media and regional newspapers via business allies. “Hungary has become a successful laboratory of illiberal governance with an institutional system tailor-made to serve Fidesz’s purposes and goals,” it said.

The election was the latest victory for European populism, observers suggest. Liberal critics viewed the result with alarm, the FT adds:

Opposition and civil society groups in Hungary face an uncertain outlook. Fidesz’s likely two-thirds majority will enable it to push through a planned crackdown on non-governmental groups called the “Stop Soros” package, which the party signalled was now an early priority.

“With this massive victory, Europe will now have an entirely legitimate bastion of a rightwing dictatorship — also known as ‘illiberal democracy’ — in its midst,” said Peter Rona, a Hungary-born economics professor at Oxford University. “The yearning for security [in Hungary] has trumped the need for liberty, and the loss of EU credibility will have reached an important point.”

Orbán’s re-election disproves everything we thought we knew about the resilience of democratic institutions, according to Harvard’s Yascha Mounk (right), the host of The Good Fight podcast and the author of The People vs. Democracy: Why Our Freedom Is in Danger and How to Save It.

The primary problem with Orbán is not his decision to close his country’s doors to refugees. It is the fact that he has abolished the independence of the judiciary, destroyed the freedom of the press, and perverted the country’s electoral system, he writes for Slate:

Defenders of liberal democracy need to be very careful to distinguish between democratically legitimate policies they deeply dislike and attacks on democratic norms and institutions that threaten to destroy the whole system. But by the same token, anti-anti-populists need to be very careful not to become complicit in the destruction of democracy just because they happen to agree with some of the policies pursued by the supposed champions of the people.

Orbán’s signature tactic is a weaponized culture war, anchored in an emotional narrative of Hungarian victimhood and redemption, the Washington Post suggests. He wants to make the nation great again after centuries of subjugation and humiliation at the hands of the Ottomans, the victors of World War I, the Soviet Union and now menacing globalists to the west.

The last time Fidesz had a supermajority in Parliament, it used it to push through a series of problematic unilateral changes to the country’s constitution and laws that weakened checks and balances on the executive, notes Human Rights Watch analyst Todor Gardos. There are already signs that the new government plans to deepen its crackdown on independent groups and critical voices.

Jozsef Peter Martin, the executive director of Transparency International Hungary, an anticorruption advocacy group, said the election was conducted on an unfair playing field. He compared the vote to playing soccer on a field set at a 45-degree angle, the New York Times reports. “The whole institutional system is swayed to one party,” Mr. Martin said. From the state-controlled news media to the gerrymandering of electoral districts to favor Fidesz, an already fragmented opposition found it hard to compete, he said.

Almost immediately after the results were announced, a climate of fear descended on Hungarian nongovernmental organizations and liberal actors—the same type of people against whom Orban had vowed during the campaign to “seek amends” if reelected, the Washington Post adds:

On Sunday, government representative Zoltán Kovács told Index, a leading Hungarian news outlet, when asked about whether Fidesz would pass the “Stop-Soros” law package if it wins the majority: “Those organizations that want to influence Hungarian politics unlawfully need to be closed down.”

“In recent years, the government has tried to pull back civil rights organizations as much as it could,” said Júlia Iván, director of Amnesty International Hungary.

Despite all we read and hear about the suppression of the civil society in Hungary and the Orban government’s propaganda efforts, often likened to those of President Vladimir Putin’s Russia, Hungarian elections — unlike Russian ones — are sufficiently free and fair for the country to remain a democracy, argues one observer:

The Organization for Security and Cooperation in Europe, which monitored the election, noted the “shrinking space for informed political debate” and laws limiting media pluralism to a certain degree, but didn’t complain about the parties’ ability to reach voters. This time around, Fidesz won on an unexpectedly high — and genuine — turnout, almost 69 percent, compared with less than 62 percent in 2014. This wasn’t a fake victory like Putin’s last month.

The result appears to confirm that Hungary is on a decidedly authoritarian trajectory, as some observers hinted before the poll.

“The election will determine whether Hungary consolidates itself as a democracy or whether it aligns with Putin and the ascendant authoritarians of the 21st century,” said Michael Ignatieff, the president and rector of Budapest’s Central European University, an institution backed by George Soros that Orban has repeatedly threatened.

Through Freedom House’s Nations in Transit project, which has tracked developments in postcommunist Europe and Eurasia since 1995, we have seen an explosion of illiberal smear campaigns in the last five years, with ruling party politicians or the president attacking civil society or the media in 25 of the 29 countries in our survey, note Michael Abramowitz and Nate Schenkkan.

Politicians often combine these smear campaigns with xenophobic, anti-gay, and anti-Semitic rhetoric that places civil society groups and journalists outside of the nation, they write for Foreign Affairs:

By doing so, these illiberal leaders redefine what it means to be a citizen and what it means to live in a democracy. In attacking civil society and media in these terms, they are attacking the concept that pluralism of identities and opinions within a society is normal and even beneficial. Without such institutions, demagogic leaders or political parties can pass self-serving laws and accrue ever more power to themselves. This is part of a frightening global trend.

“If illiberalism becomes normal in countries that have traditions of liberal democracy, then we are likely to see illiberalism thrive around the world,” they add. 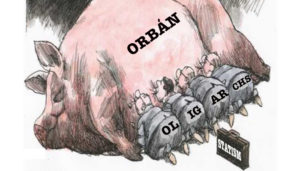 Why does the E.U. continue to transfer billions of dollars to aide a man who describes the E.U. as an enemy? analyst Frida Ghitis asks. Article 7 of the E.U. treaty says that some of a country’s rights may be suspended if it is in serious violation of E.U. values. Suspending a member is particularly difficult because E.U. rules require unanimity for major proposals, she writes for the Post:

Poland, for one, whose government admires Orban, would resist. And the European People’s Party (EPP), the conservative bloc within the European Parliament, could also protect Hungary, a member. But others, like Germany, have particular power within the EPP, and they could pressure members to take action. Suspending some of Hungary’s rights would leave the E.U. door open in case Hungarians who want to take their country back to the path of real democracy manage to defeat the Orban machine.

An even more effective tactic: turn off the flow of subsidies from Brussels to Budapest, Ghitis adds.