The world today is not converging around liberal democratic government, as it seemed to be for more than a generation, argues Stanford University’s Francis Fukuyama. The Third Wave of democratization that Samuel Huntington himself observed progressed in the period from the mid-1970s to the mid-2000s from about 35 electoral states to perhaps 115 by 2008. But since then the wave has gone into reverse, what Larry Diamond has labeled a democratic recession, he writes for The American Interest.

Not only has the number of democracies declined somewhat, but important qualitative changes have taken place. Big authoritarian powers like Russia and China have grown self-confident and aggressive. Meanwhile, existing liberal democracies have lost much of their appeal after the financial crises in America and the Eurozone during the 2000s, and are suffering from populist uprisings that threaten the liberal pillar of their political systems.

In place of the Left-Right ideological split defined largely by issues revolving around the relative economic power of capital and labor in an industrialized setting that characterized 20th-century politics, we now have a political spectrum organized increasingly around identity issues, many of which are defined more by culture than by economics narrowly construed​. This shift is not good for the health of liberal democracy.

“Neither the China model nor the emerging populist-nationalist one represented by Russia, Turkey, or Hungary will likely be sustainable economically or politically over an extended period,” adds Fukuyama, ​a board member of the National Endowment for Democracy. “On the other hand, democracies have mechanisms in place for correcting mistakes.” 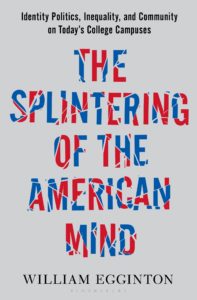 A further threat to democracy comes from a polity insufficiently and unequally educated in the liberal tradition, according to a new book by reviewed by Thomas Chatterton Williams for The New York Times:

The fracturing and castigating discourse around identity, coupled with metastasizing inequality of both opportunity and outcome, leads Egginton to make the necessary if familiar case that a humanities education is still the “key in the formation of a public capable of democratic self-governance.” The liberal tradition, accessible to all and capable of generating an expansive common narrative that takes note of America in all her tribal guises and evokes sufficient “fellow feeling,” is, for Egginton, our only hope out of the bind.