China’s ruling Communist Party is pursuing an aggressive, covert infiltration of US educational and social institutions to quell dissenting voices and strengthen its soft power overseas, according to a report written for an influential US congressional body, The South China Morning Post reports:

The Chinese Communist Party (CCP) is seeking “to co-opt ethnic Chinese individuals and communities living outside China”, said the report – China’s Overseas United Front Work – Background and Implications for US – published on Friday by the US-China Economic and Security Review Commission. Chinese analysts said it indicated that Beijing and Washington were clashing on a new front – over ideology – as well as on trade and security.

“The US and China are clashing in three areas now – on strategy, trade and ideology,” said Shi Yinhong, a professor of international relations with Renmin University in Beijing. The US had opened a new front in its confrontation with China since last year, accusing it of using “sharp power” overseas.

The National Endowment for Democracy argued in its December 2017 report, Sharp Power: Rising Authoritarian Influence, that targets of CCP influence operations are often under the mistaken impression that media, academic, and friendship organizations operate independently from the CCP, but “[m]ost, if not all, of the Chinese entities that engage with their peers abroad unequivocally serve national party goals—either by following official or unofficial guidelines, or by avoiding taking positions that might violate [CCP] guidelines or jeopardize the regime’s goals,” the Commission report notes.

“Promoting soft power overseas through official means can of course result in a backlash – one example of that is the government-backed Confucius Institutes,” said Shou Huisheng, an international relations researcher at Tsinghua University in Beijing. “It will take time for the West to accept China’s rising power, and it will also take time for China to adjust its tactics and methods when it comes to overseas propaganda.” 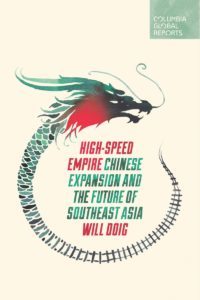 China is utilizing its Belt and Road Initiative to expand its influence in South and Southeast Asia—and possibly failing as well, Council on Foreign Relations analyst Joshua Kurlantzick argues in a Washington Monthly review of Will Doig’s book High-Speed Empire: Chinese Expansion and the Future of Southeast Asia.

Asia’s smaller powers may welcome any other power that comes in to compete with India to prevent economic and political domination, says Columbia University’s Andrew Nathan. But two things should be avoided, he tells analyst Akhilesh Uphadyay:

“I don’t think the Xi regime aspires to bring back Maoism or Stalinism,” adds Nathan. “But if it is authoritarianism, it’s a very hard authoritarian system It’s not a system interested in political reform in a liberalizing direction.”

China mainly utilizes its cyber means for espionage and intellectual property theft, a recent Brookings seminar heard. “Naming and shaming” has been an effective tool against China because of its government’s concerns on the potential blowback on its soft power, said Chris Painter, former Coordinator for Cyber Issues at the U.S. Department of State.

Unlike Russia, for instance, China largely limits its projection of cyber power to propaganda, intellectual property theft, and intelligence gathering, said William Carter, deputy director of the Technology Policy Program at the Center for Strategic and International Studies (CSIS):

Building on Painter’s assessment of China’s concern for maintaining its soft power, Carter also stated that China prefers to be seen playing the role of the “good guy.” But for China to have its cake and eat it too, it must be more subtle in its operations and focus on strategic goals. He views the professionalization of China’s capabilities as another way to delegitimize the United States: Beijing not only wants to gain influence in the region, but to raise its standing in the international mechanisms that control the cyber sphere.

China’s propaganda work has been “absolutely correct” and those who work in the field should be trusted, President Xi Jinping told top officials, amid domestic criticism China has messed up its messaging over a trade dispute with the United States, Reuters reports:

The growing trade conflict is causing rifts within China’s Communist Party, with some critics saying that an overly nationalistic Chinese stance may have hardened the U.S. position, sources close to the government have said. But speaking at a major meeting of senior propaganda officials, the first such gathering in five years, Xi said that since the previous Communist Party Congress, in 2012, propaganda efforts had been successful and made great strides.

“Superior traditional culture has been widely promoted, mainstream public opinion has been continuously consolidated and expanded, cultural self-confidence has been highlighted, national cultural soft power and Chinese cultural influence have been greatly enhanced,” state media cited Xi as saying in a report late on Wednesday.

Ideologically, China has used “Panda Diplomacy,” soft power, activity that includes a presence in art forums, musical and dance festivals, and cultural exchanges, and more than 500 Confucius Institutes on university campuses throughout the world, he writes for The American Thinker. China is a competitor in political and cultural influence as well as in world trade and global security and reform of global governance.  The question can be raised: is the center of gravity of the world economy shifting from Atlantic to Pacific?

China’s willingness and success in creating a zombified version of domestic civil society should present a cautionary tale for liberal democracies who have not quite thought through the consequences of China’s discourse-power project, notes analyst E. John Gregory. The Party does kill people to maintain its discursive safe-space, but it prefers not to, he writes for The National Interest:

The Party would prefer that all subjects as well as institutions in society simply support and repeat the Party line on their own. Over a period of thirty years, it boldly reengineered society to create subjects who lacked the terms of discourse and reference points to be able to even effectively criticize the Chinese system. It also created a generation of mostly politically-inert college graduates with little desire to criticize the system. This is an impressive, long-term accomplishment, and it was deliberated executed, as the Chinese are committed to doing much the same thing over the long term on the international stage.

Generally, the term “sharp power” as applied to China refers to its well-funded, systematic campaign to shape public opinion and perceptions around the world, the Brookings Institution adds:

The Chinese government has drawn on a diverse toolkit that includes people-to-people exchanges, cultural activities, educational programs, and media enterprises to build audiences outside of China. For Taiwan, however, sharp power has a special meaning. Since the election of President Tsai Ing-wen in January 2016, Beijing has not only exerted diplomatic and military pressure on her administration but has also sought in a variety of ways to penetrate the Taiwan political system itself.

On September 11, the Center for East Asia Policy Studies at the Brookings Institution will host a discussion with J. Michael Cole, a Taiwan-based security analyst, and Brookings Senior Fellow Richard Bush exploring the means that China seeks to manipulate Taiwan politics and the implications for relations between the two sides of the Taiwan Strait and for U.S. policy. RTWT