The Indo-Pacific is quickly becoming the most important region for democracy support activities, as it embodies both growing support for democracy and recent evidence of backsliding, according to a new analysis from the Center for Strategic and International Studies.

The United States’ strategy for advancing democratic governance in the region will be more effective if it is developed and implemented in close consultation with like-minded regional states rather than simply delivered from Washington, say Michael J. Green, Nicholas Szechenyi and Hannah Fodale, the authors of Enhancing Democratic Partnership in the Indo-Pacific Region.  They draw on case studies of the democracy assistance efforts of Australia, Japan, India, Indonesia, South Korea, and Taiwan to identify three priorities for U.S. engagement on democracy in the Indo-Pacific region: Many countries in South Asia have long been hoping for deeper ties with countries that would help counterbalance Beijing’s influence, notes Mohamed Zeeshan, Editor-in-Chief of Freedom Gazette and author of “Flying Blind: India’s Quest for Global Leadership.”  The Biden Summit’s noble goal of furthering democracy and building ideological consensus against China could have been better fulfilled by a more inclusive summit, deeper engagement with civil society, and incentives to achieve specific goals, he writes for The Diplomat.

The US is unique in that NGOs and the private sector, as well as the government, are involved in promoting democracy support, the CSIS report adds. It cites the National Endowment for Democracy (NED – see below) and its core institutes’ engagement in operational planning, research and policy advice, and financial assistance to democratic institutions and organizations, as well as private sector support through its commitment to labor rights, transparency, anti-corruption, and governance and by incorporating human rights into  overseas operations. RTWT 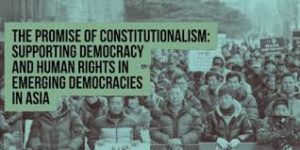 The CSIS Japan Chair hosts a discussion reflecting on outcomes from the Summit for Democracy, and key findings from Enhancing Democratic Partnership in the Indo-Pacific Region.