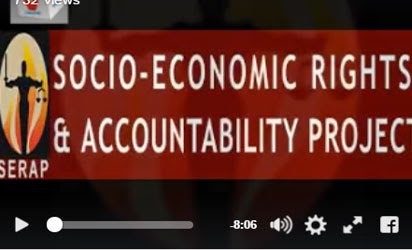 “The public has a right of access to information which is a public concern and of which the public ought to know,” said journalist and human rights activist Richard Akinnola at the report’s launch.

“The newspapers, TV and radio stations are the agent, so to speak of the public to collect the information and to tell the public of it,” he added. “In support of the right of access, they should not in general be compelled to disclose their source of information. Neither by means of discovery by trial nor by questions or cross-examination at the trial nor by subpoena.”

Painstaking research and patience are the dual hallmarks of an investigative journalist, reads the manual, published with the support of the National Endowment for Democracy (NED):

You need to check and double check whatever your sources are giving you. Anyone who walks to you to give you documents incriminating someone has a purpose or agenda, and it may not be altruistic. He may want to even scores with someone and in that process, may procure fake and questionable documents that might appear real and if you don’t double check and meticulous, you may be court in the wen of a libel action after publication. RTWT

Human rights lawyer, Mr. Femi Falana commended SERAP and challenged African civil society groups to lead the battle against corruption in a keynote statement – “How to strengthen African Commission on Human and Peoples’ Rights and NGOs to combat Corruption in Africa” – at the African NGO Forum held in Banjul, The Gambia:

Mr. Falana enjoined African NGOs to emulate a Nigerian based NGO, the Socio-Economic Rights and Accountability Project (SERAP), which has obtained court orders to compel the Nigerian government to educate every Nigerian child, publish the names of looters, account for the loot recovered since 1999, account for the money spent on water and electricity. He commended SERAP for exposing the World Bank which had made false claims in respect of the Abacha loot. In a bid to shield some public officers from prosecution for corruption the Bank had falsely claimed that the recovered loot of $500 million was spent on some projects.