The sense of crisis in Iran runs deep and wide. The economy is in free fall. The currency is plummeting. Rising prices are squeezing city dwellers. A five-year drought is devastating the countryside. The pitched battle between political moderates and hard-liners is so perilous that there is even talk of a military takeover, the New York Times writes:

Now, the lifeline offered by the 2015 nuclear deal, which was supposed to alleviate pressure on Iran’s economy and crack open the barriers to the West, is falling apart, too: President Trump announced Tuesday that he was withdrawing the United States from the agreement… Dissatisfaction over state policies is so widespread that many wonder if the Islamic Republic and its current ideology are even sustainable.

Trump’s decision sets the stage for a resurgence of political infighting within Iran’s complex power structure, Iranian officials told Reuters. It could tip the balance of power in favour of hardliners looking to constrain Mr Rouhani’s ability to open up to the West.

“They will blame Rouhani. They will continue their shenanigans at home and abroad. And they will have the US to blame for the failure of the economy,” said Abbas Milani (right), director of the Iranian Studies program at Stanford University.

Some veteran diplomats said Mr. Trump may yet find moments where he will scale back his more radical impulses at the urging of advisers, the Times reports.

“I believe his foreign policy will continue to be a mix of the two,” said Zalmay Khalilzad, [a National Endowment for Democracy board member] who served as ambassador to the United Nations under Mr. Bush. “His instinct and values are what he committed to during his campaign but will continue to selectively adapt to circumstances and transact based on both.”

Nationwide protests in December and January — aimed at the entire leadership class — illustrated the depth of Iranian disillusionment, the Times adds.

“We could witness a blind explosion of anger and we will not know the outcome of such an event,” said Davoud Hermidas-Bavand, a professor of international relations who has taught at the National Defense University. 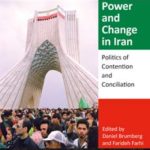 As a young man in the early 1980s, Heshmat Tabarzadi was a supporter of Iran’s first supreme leader, Ayatollah Khomeini. Over time however he became disillusioned and has emerged as powerful dissident, spending stints inside Iran’s notorious Evin prison, writes Eli Lake:

In 1999, he helped to lead the Tehran University uprising and he also participated in the 2009 protests against the stolen presidential election that year. Now Tabarzadi is the spokesman for Iran’s Solidarity for Democracy and Human Rights movement, an underground umbrella organization of civil society groups. ….He told me that now the best thing for the U.S. to do is to support technologies like Telegram (left) that allow Iranians to communicate securely with one another. An Iranian court recently announced a ban on Telegram, which exposed again Rouhani’s powerlessness.

But Carnegie analyst Karim Sadjadpour (right) fears that scrapping the Iran nuclear deal could further empower undemocratic forces in Tehran and destabilize the Middle East even more. “I have always subscribed to [historian] Ibn Khaldun’s thesis when it comes to Iran, which is that regimes are oftentimes built and destroyed over three generations,” he contends:

The first generation builds it, the second generation preserves it, the third generation loses it. The Soviet Union lasted three generations. The Islamic Republic of Iran is kind of entering its second-generation leadership and, again, I think it was fanciful that the nuclear deal was going to transform Iran into a democracy, and I also think it is fanciful to think pulling out will lead to the collapse of the Islamic Republic. Like the Soviet Union, this is a system you essentially have to contain and constrain until it crumbles under the weight of its own malaise and internal contradictions.

Alex Vatanka, a senior fellow at the Middle East Institute, told The National that the administration “appears to be pursuing regime change in Iran.”

“They are going for the jugular,” he said. The US administration’s gamble, is “that the Iranian regime is on the brink of collapse and that [the US] leaving [the] deal would pressure it to collapse, but [Mr Trump] is underestimating how the Islamic republic keeps itself together”.

The parallels with the build-up to the Iraq war are troubling, says the FT’s Edward Luce.

Others suggest that regime collapse is more likely and that regime change in Tehran does not mean an Iraq-style invasion; notes analyst Zev Chavets, although tough new American sanctions could destabilize the regime.

The issue is exacerbating divisions between the US and European democracies as “America First” creates a vacuum of trans-Atlantic leadership that the Europeans have so far seemed incapable or unwilling to fill, the New York Times adds.

“The allies are certainly sick of this but don’t seem to have an alternative,” said Jeremy Shapiro, a former career State Department official now at the European Council on Foreign Relations. “The Europeans are invested down a path of trying to please the president, not out of belief but more hope against hope that they will convince him,” he added. “And they only pursue this at such a level of embarrassment because they don’t have an alternative.”

Iran’s ruling elite fears a revival of anti-government protests in January that revealed the establishment was vulnerable to popular anger fueled by economic hardship. At least 21 people were killed in the protests, Reuters adds.

Will the recent unrest serve as a wake-up call for the political elite that more needs to be done? asks Nader Habibi, Henry J. Leir Professor of Practice in Economics of the Middle East at Brandeis University:

Unfortunately, an inefficient populist response is probably as far as the country’s supreme leader will be willing to go – at least for now. Protesters’ more political demands, such as tackling corruption, limiting Khamenei’s powers or reducing Iran’s role in regional conflicts, are unlikely to be addressed anytime soon….For most Iranians, however, corruption, poverty and economic inequality can not be addressed without serious reforms. And that suggests that while the most recent uprising may be winding down, similar uprisings are likely in the future.