The Kremlin’s disinformation playbook is readily deployed when it comes to crisis management abroad. But it is also saturation bombing their citizens and others beyond their borders, with false narratives designed to undermine elections, governments, and societies. Putin’s info-war has now metastasized , writes Diane Francis, a Senior Fellow at the Atlantic Council’s Eurasia Center:

A recent survey of Russian TV news by the Ukraine Crisis Media Center* and Estonian Center of Eastern Partnership quantifies the scale of the assault against Ukraine and Europe between the summer of 2014 to December 2017. On Russia’s three state-controlled TV channels, anti-Europe news was shown an average of eighteen times per day. The narratives are that Europe is morally bankrupt, weak, impoverished, and riddled with crime and terrorism. 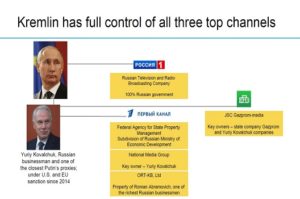 But Russia’s attempts to splinter Europe have only galvanized the continent’s democracies, according to William Courtney, adjunct senior fellow at the RAND Corporation, and Michael Haltzel, Senior Fellow at Johns Hopkins University’s Center for Transatlantic Relations. Meanwhile, the struggle for hearts and minds continues, they write for the Moscow Times:

In both Western and Central Europe, support for Putin’s authoritarian rule persists among populists of both the Right and Left. The outcome of recent elections in Italy is particularly troubling. Moreover, Moscow is actively trying to undermine struggling new democracies in the Balkans, hoping to prevent their joining the Euro-Atlantic community. Overall, however, Russia’s foreign policy has stiffened Europe’s will. As in the Soviet period, Europeans and Americans can thank the Kremlin for shoring up Western resolve.

Stopping anti-European messages from gaining ground requires the cooperation of tech companies such as Google and Facebook, notes Spain’s El Pais. Worryingly, two out of three Europeans come across one piece of fake news every day, according to EU member data. What’s more, 80% believe that fake news is a threat against democracy. But creating legislation for the entire EU – with corresponding sanctions – that is able to neutralize lies and fight against populist discourse that breeds hate, does not appear to be on the agenda.