The Islamic Republic of Iran has come under fierce criticism amid reports that the judiciary amputated a man’s fingers for theft in the latest in a series of incidents that prompted members of the European Parliament to call for sanctions on the regime for its human rights violations (HT: FDD).

In the 40 years since the 1979 revolution, Iran’s theocrats have been vindictive toward women who dare to challenge their authority, note Kerry Kennedy and Gloria Steinem. Female artists, novelists, journalists, academics, and political activists — including Shirin Ebadi, a Nobel Peace Prize laureate, and Mehrangiz Kar (left), recipient of the National Endowment for Democracy’s Democracy Award — have been forced into exile. They were the lucky ones. Those still in Iran have been imprisoned, tortured, and even executed, they write for the Boston Globe.

As the United States weighs its response to Iran for attacks on oil facilities in Saudi Arabia and more, it’s time to mention the dissidents, journalists, and human rights defenders imprisoned for speaking truth to power, they add. 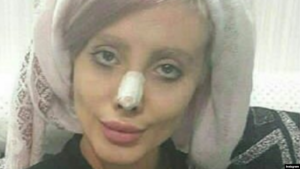 An Iranian Instagram star who gained recognition for her resemblance to actress Angelina Jolie through cosmetic surgery was arrested Saturday and charged with a variety of crimes, according to Agence France-Presse. Fatemeh Kh, known as Sahar Tabar, (right), was arrested on charges of blasphemy, promoting violence, illicit education, insulting the Islamic veil, spreading hatred and encouraging youths to commit corruption, according to CNN.

Drawing attention in the West, like Tabar did, can especially place someone on the government’s radar, said Alireza Nader, founder and chief executive of the New Iran Foundation.

“Social media reaches so many Iranians and is considered threatening to the regime,” he said, noting that social media platforms have been used for civil disobedience and human rights advocacy. But Nader added, “If they shut it down, they shut down their own means of communication.”

Masih Alinejad, an activist who has lived in exile in the United States for the past decade, is one of the most effective campaigners for ending the compulsory hijab for women — the most visible sign of Iran’s gender segregation — through the #WhiteWednesdays and #MyStealthyFreedom social media campaigns that encourage women in Iran to share images and videos of themselves without the mandatory head covering, adds Jason Rezaian:

Her brother, Ali, was arrested in Tehran late last month, in an apparent bid to silence her. “The arrest of my brother is a continuation of the attempt to instill fear in Iranian public and silence me,” Alinejad told me. “This is a systematic attack.” She also noted that six women’s rights activists have recently been sentenced to a total of 109 years for posting videos relating to the campaigns.

Some of the protesters in Iraq have been chanting anti-Iranian slogans while ridiculing Iranian General Qassem Soleimani, often seen as the architect of Iranian influence in Iraq and throughout the broader region, the Soufan Center adds:

Iranian-backed Shia militias continue to jockey for power and influence in the country. The growing protests movement could not come at a more difficult time for Iraq, as the so-called Islamic State continues to look for ways to regenerate its networks in Iraq and across the border in neighboring Syria. With the government and security forces focused on quelling domestic dissent, there will inevitably be fewer resources and less effort dedicated to combating the Islamic State. This is just one of several areas where poor governance has a direct link to the pervasive challenge posed by terrorists, militias, and a host of other violent non-state actors.