Ukraine’s Parliament began its morning plenary with a moment of silence for anti-corruption Kateryna Handziuk, who has died following an acid attack according to 112 Ukraine.

Ukrainian Prosecutor General Yuriy Lutsenko has announced his plans to resign amid a notorious situation caused by the death of Kherson activist Kateryna Handziuk after an acid attack, UNIAN reports.

“To prove that no one clings to power, today I am submitting my letter of resignation to the president of Ukraine. And you need to consider this question in parliament. I ask you to do this during the current week,” he said in the Verkhovna Rada, Ukraine’s parliament, an UNIAN correspondent reports.

Attacks on Ukraine’s civil society must stop and those responsible for such crimes must be brought to justice, said State Department spokesperson Heather Nauert.

“We expect the Ukrainian authorities to redouble their efforts to quickly and thoroughly investigate this crime and bring those responsible to justice,” a spokesman for the European Commission said on Monday.

“Moreover, tangible steps are needed to prevent attacks against civil society activists and investigative journalists in Ukraine,” he added.

The Council of Europe also expressed concern about the increase in attacks on representatives of civil society. 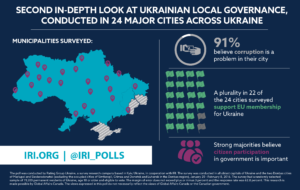 Kateryna was very vocal about local corruption and Russian influence in the region, writes Vitaliy Shpak, Program Officer for Europe at the National Endowment for Democracy. First, as an activist and active participant of both Maidans (2004, 2013), as a volunteer mobilizing public support for internally displaced people leaving annexed Crimea, and later as a local councilor and deputy mayor of Kherson, she was involved in local politics and was only too well aware of entrenched interests.

Civil society groups such as ‘Hidden Interests’ (above) and ‘Anti-Corruption Headquarter’ have taken the lead in combating Ukraine’s kleptocrats.

“Using data taken from open sources, the ‘Hidden Interests’ software can identify possible conflicts of interest by checking political leaders’ decisions or voting records against a list of companies or organizations linked to them or their relatives,” Reuters reports.

The main rationale for civil society organization’s anti-corruption efforts lies in CSOs’ potential to overcome the ‘collective action dilemma’ of corruption and directly hold the government accountable, according to a recent report.

“Given that civil society efforts against corruption tend be more effective in environments with a reasonably competitive political system and political will among authorities, donors should prioritize supporting anti-corruption work in countries where those conditions are present,” it concludes.