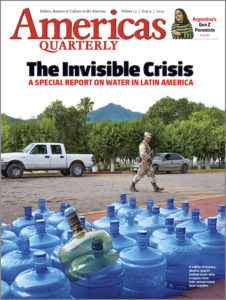 Latin America used to be known as the land of the military junta. It is now at risk of becoming the land of militarized democracies, according to Javier Corrales, a professor of political science at Amherst College and author of Dragon in the Tropics: Venezuela and the Legacy of Hugo Chávez.

The scenes from Ecuador and Chile are a warning that democratically elected governments throughout the region, facing rising domestic unrest, are relying on the military to survive. If history is any guide, this does not end well, he writes for Americas Quarterly:

Democracies are supposed to limit the powers of the military. This is especially important when there is a long history of military intervention in politics, as is the case in Latin America. But what we are seeing is that when democratic governments feel threatened, they are tempted to expand the powers of the military……. Latin America’s rising unrest has far more to do with the middle-income, resource, and party traps than perhaps the traditional poverty and inequality traps. This is the reason we are seeing protests in countries that are no longer that poor. This moment of unrest thus represents an opportunity for governments, citizens, and international lenders to activate discussions about how to unlock these new traps.

There are no easy answers. But one thing is clear: over-empowering the military is never the solution to any of these challenges, adds Corrales, a contributor to the National Endowment for Democracy’s Journal of Democracy.