China cannot endorse Russia’s invasion of Ukraine because the maintenance of territorial integrity is “primordial” in Beijing’s foreign policy, but nor can it align itself with a NATO that it sees as an instrument of US hegemony, argues Sean Golden, Senior Associate Researcher at the Barcelona Center for International Affairs.

Beijing advocates a diverse, multipolar world as an alternative to what its calls US/NATO hegemony, with Xi Jinping promoting his “China Model” as an alternative to neo-liberalism in a new world order, he adds. With liberal democratic polities riven by radical polarization, hostile party politics and rampant inequality, China claims its version of an efficient technocratic “benevolent authoritarianism” is a viable alternative.

But China will pay a price for effectively siding with Russia, says a leading expert.

China’s long-term strategy to compete with the U.S. rests on the critical assumption that America’s European allies will stay neutral in the U.S.-China rivalry, notes Minxin Pei, a professor of government at Claremont McKenna College. But Western solidarity in responding to Russia’s invasion of Ukraine has called this assumption into question.

If anything, the EU will from now on move closer to the U.S. on China-related issues because its members are now more beholden to the U.S. and have a greater appreciation of American power in maintaining peace and security in Europe. European countries may force Beijing to pay a price for its new strategic alignment with Russia, adds Pei, a board member of the National Endowment for Democracy (NED).

In Latin America, the PRC’s well-funded and ongoing sharp power efforts fall short of direct military confrontation but move beyond the traditional realm of soft power, presenting a multitiered set of challenges to the United States and its regional allies, where the cost of not engaging in this regional theater will be high, say analysts Douglas Farah and Marianne Richardson. 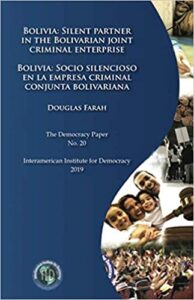 The PRC’s strategy increases support for authoritarian regimes connected to what is known as the Bolivarian Joint Criminal Enterprise (BJCE) — a network of allied companies, regional structures, and historically linked individuals operating across the globe — and other anti-democratic populist governments, they write for Dialogo:

Unsealed files have revealed a plot by five people working on behalf of Chinese secret police who stand accused of “transnational repression schemes” to target American residents whose political views and actions were “disfavored by the People’s Republic of China (PRC) government,” the BBC reports.

Federal authorities unsealed charges against five people Wednesday, accusing them of acting on behalf of the Chinese government to intimidate U.S. dissidents in three separate cases, including an effort to derail the congressional campaign of a Brooklyn man who was part of the 1989 pro-democracy demonstrations in Tiananmen Square, USA Today reports:

Federal prosecutors alleged that Qiming Lin, 59, worked for China’s secret police force known as the Ministry of State Security while discussing various plots to physically harm or smear the New York candidate by using prostitutes to compromise the victim who is also a U.S. military veteran… In a separate case, Shujun Wang, a 73-year-old Chinese scholar who helped begin a pro-democracy organization in Queens, is charged with secretly operating against activists at the direction of the Chinese government.

“Transnational repression harms people in the United States and around the world and threatens the rule of law itself,” said Matt Olsen, the assistant attorney general for national security. “Authoritarian states around the world feel emboldened to reach beyond their borders to intimidate or exact reprisals against individuals who dare to speak out against oppression and corruption,” he added.

As do their proxies…..

A group of Chinese international students at Cornell University booed and left an event last week in protest after a Uyghur student spoke about her brother’s detention amid the Chinese government’s genocide in Xinjiang, VOX reports:

Uyghurs and other marginalized groups with ties to China can face intimidation, state surveillance and threats to their family members in China when they speak out on U.S. campuses about oppression by the Chinese government. Some Chinese international students at universities in the U.S. and Canada have reported anti-Beijing speech to university authorities as a form of anti-Chinese racism, or they reported Uyghurs and Chinese dissidents on campus to Chinese diplomatic officials.

It is the latest in a series of incidents in which Uyghur advocates have been harassed or prevented from speaking at North American colleges. 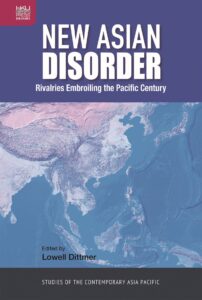 (1) people in Asia have more positive views of China if they believe China to be more democratic than the United States;

(3) people who think China will be the most influential country in the future or believe China to be a model for development have more favorable views of the country. RTWT

The lack of appeal of the CCP’s political model and the fundamental resilience of democracies are reasons for hope, the International Republican Institute’s Daniel Twining told a Senate Foreign Relations Committee this week. 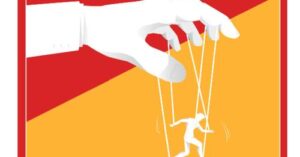 Despite advances made by the PRC and other authoritarian actors in recent years, IRI’s work has thrown light on deep reserves of this resilience, even in nations most deeply impacted by CCP political interference, said Twining. Civil society and democratic activism remain the most effective tools democracies have to identify and push back against PRC influence.

Yet China is winning the information war in the Pacific, says Sue Ahearn, the creator and co-editor of the Pacific Newsroom and co-convenor of the Australia Asia Pacific Media Initiative.

Across sub-Saharan Africa, China has burst on to the scene as a leading partner, the Hoover Project on China’s Global Sharp Power adds. Although this affords African nations rich opportunities, it also exposes them to the risks of authoritarian sharp power and makes the conditions for democracy in the region more challenging. Where are the red flags? And how can African nations engage with China while safeguarding their sovereignty and advancing good governance, development, and democracy? 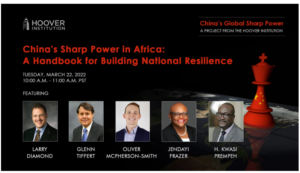 The Hoover Project on China’s Global Sharp Power hosts the launch event for a new report China’s Sharp Power in Africa: A Handbook for Building National Resilience on Tuesday, March 22, 2022 from 10AM – 11AM PST. Speakers: Larry Diamond – a senior fellow at the Hoover Institution; Glenn Tiffert – a research fellow at the Hoover Institution and a historian of modern China; Oliver McPherson-Smith – a doctoral candidate in political science at the University of Oxford; Jendayi Frazer – the Duignan Distinguished Visiting Fellow at the Hoover Institution, a former U.S. Assistant Secretary of State for African Affairs, and former U.S. ambassador to South Africa, and a board member of the National Endowment for Democracy (NED); H. Kwasi Prempeh – a Professor of Law at Seton Hall University Law School, Newark, New Jersey, U.S.A. Register here.

#CCP has made a serious strategic miscalculation, says @NEDemocracy board member @MPEI2014 https://t.co/rQhUI0an7Z