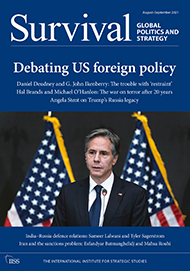 The foreign policy agenda of the Quincy Institute for Responsible Statecraft – a coalition of libertarians, neo-realists and the progressive left – would diminish the prospects for liberal democracy and human rights globally, say two leading foreign policy experts.

The Quincy coalition agenda  would diminish the prospects for liberal democracy and human rights globally, they write in ‘Misplaced Restraint: The Quincy Coalition Versus Liberal
Internationalism‘, an article for Survival: Global Politics and Strategy. And it offers a woefully weak response to the undeniable reality of China’s expansion and hegemonic aspirations. A critique of the Iraq blunder during the post-Cold War unipolar moment provides little guidance for conducting American foreign policy in response to cascading global interdependence, democratic backsliding and a historic strategic challenge from an illiberal great power.

U.S. Cold War strategy was rooted in an assessment that if Soviet communism could be contained, democracy would in the end prove the more viable system, notes the Atlantic Council’s Amb. Daniel Fried. That strategy didn’t work everywhere every time. But it worked well enough in the end, he writes for Just Security.

Presidents Jimmy Carter and Ronald Reagan pulled back from détente as an end in itself and returned to a more values-driven strategy, adding to dialogue with Moscow pressure on the USSR and support for democratic dissidents in the Soviet Bloc. In 1989, this strategy, which had been regarded by many as hopelessly unrealistic, succeeded. Democratic dissidents in Poland and elsewhere in Soviet-occupied Europe toppled communism in the name of democratic values and sought to join the U.S.-led liberal international order, adds Fried, a board member of the National Endowment for Democracy (NED).

American international success depended not just on raw American power but on the combination of power, liberal-democratic ideas and liberal-internationalist projects, Deudney and Ikenberry contend:

The United States was ascendant in part because the liberal-democratic ideal, as manifested in modern America, was profoundly appealing to people all over the world. American leadership in solving global problems and building international institutions to advance liberal-democratic and capitalist goals was a multifaceted effort to make the world safe for democracy. The alliances of the Second World War and the Cold War were more than mere expedients. They arose from the superior capacity of modern liberal democracies to solve the problems of global interdependence, and of modernity itself.

The Biden program proposes an array of new restraints, to be sure, but unlike the Quincy coalition’s program, it will advance rather than impede the realization of basic liberal-democratic goals and values, they add. RTWT