Defending and advancing democracy is “the cause of our time,” says Damon Wilson, President & CEO of the National Endowment for Democracy (NED).

Democracy has taken hits or is on the defensive with coups in Burma and Guinea, manipulated elections in Nicaragua and Russia, and suppressed protests in Belarus and Cuba. And yet from Moldova to Zambia, democrats are demonstrating resilience and resolution, and the NED exists to provide moral and material support to their struggles, he adds.

But democracy assistance groups are likely to find themselves operating in a new strategic context, says a leading analyst.

Under the circumstances, the old consensus in support of a global liberal order seems fated to fade even as geopolitical challenges such as a rising China and global problems like climate change grow, Mead concludes.

The idea that the United States is uniquely qualified to reshape the world has manifested itself in different ways in the 30 years since the collapse of the Soviet Union marked the end of a bipolar world, argues Emma Ashford, a Senior Fellow at the New American Engagement Initiative at the Atlantic Council’s Scowcroft Center for Strategy and Security. Humanitarian intervention, democracy promotion, and counterterrorism—all were attempts to mold the world according to American preferences. Yet the unipolar moment has largely failed to live up to expectations. Today, opinion is increasingly coalescing around three distinct views, she writes for Foreign Affairs:

But ideological cleavages do not preclude practical cooperation on certain issues, Ashford suggests.

“Offshore balancers might choose to work with America firsters on reining in democracy promotion and nation building,” she writes. “Progressives might make common cause with liberal internationalists on fighting kleptocracy or bolstering the role of multilateralism and diplomacy.”

Democracy advocates must also contend with the difficult legacies of the post-9/11 era, says a prominent observer.

The long-term consequences of the American overreaction to the September 11 attacks have been dire, argues Stanford University’s Francis Fukuyama. The effort to justify the Iraq invasion as a case of democracy promotion tainted the very idea of democracy in the eyes of many around the world, he writes for American Purpose.

Democracy is also threatened by left- and right-wing versions of populism, adds Henry Olsen, a senior fellow at the Ethics and Public Policy Center. The entire developed world is experiencing the end of the stable party systems built to answer the political questions posed by the ends of the Second World War and the Cold War. New political questions always lead to new political coalitions, and neither the United States nor the rest of the world is nearing the end of this global political realignment, he writes for the Washington Post.

Strengthening democratic resilience in East-Central Europe (ECE) starts with a proper diagnostic of local capabilities and vulnerabilities, argues analyst Clara Volintiru. Better, more comprehensive datasets at local level should be developed by national authorities and international organizations, she writes in a new paper for the German Marshall Fund:

As the mayor of Budapest, a major European city, Gergely Karácsony can attest to the fact that local governance matters, he writes for Project Syndicate. Whether it is through democratic engagement, emissions reductions, or social investment (areas where we have already made significant strides despite fierce resistance from the Orbán regime), local governments are well positioned to improve citizens’ lives. Injustices that alienate people from democracy can be rectified. Channels for democratic dialogue can be restored, he argues in How Democracy Can Win Again. 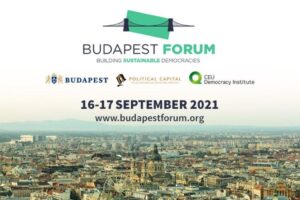 Hungary’s Prime Minister Viktor Orbán and his Fidesz party have controlled the government since 2010 and made major changes to its structure, Benjamin Wallace-Wells writes for The New Yorker:

In its 2020 annual report, Freedom House concluded that these steady incursions against Hungarian freedoms meant that the country no longer met its definition of a democracy, Wallace-Wells adds.

Secretary @madeleine Albright talks about the importance of supporting resilient and inclusive democracies on the latest episode of Democracy! The #Podcast

The timely comments of NED’s Damon Wilson come as pro-democracy organizations and activists prepare to mark the International Day of Democracy on September 15.

Ahead of the International Day of Democracy together with our partners and allies, we recognise the important role of democracy for building a future that is safer and stronger for everyone #DemocracyAllies pic.twitter.com/7DnSSegEwD