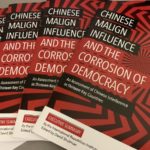 William Evanina, director of the National Counterintelligence and Security Center, said that “with the private sector and democratic institutions increasingly under attack, this is no longer a problem the U.S. government can address alone,” The Post adds.

To China and other autocracies, the United States’ democratic system is inherently threatening, notes Brookings analyst Thomas Wright. The free press promises to reveal vital secrets about the Chinese regime simply because it can, with American journalists’ 2012 reports about elite corruption in China and Hong Kong and their 2019 revelations about the repression of China’s Uighurs serving as Exhibits A and B. Social media, businesses, universities, nongovernmental organizations, and Congress have all played a role in undermining the regime in Beijing and sowing the seeds of democracy, he writes for Foreign Affairs.

Foreign threat actors— including nation-states, organizations, and individuals—are conducting malicious influence campaigns – what the National Endowment for Democracy (NED) describes as sharp power – using cyber operations, media manipulation, covert operations, and political subversion to sow divisions in our society, undermine confidence in our democratic institutions, and weaken our alliances. Such actors have become more dangerous because, with ready access to advanced technology, they are threatening a broader range of targets at lower risk, the report adds, citing three principal trends:

Evanina, the center’s director, said the past year has seen gains in information-sharing between security agencies and private companies as well as research institutions on threats but no letup in foreign entities trying to steal secrets or influence U.S. public opinion, The Wall Street Journal adds.  “The amount of foreign intelligence activity against us is so numerous,” Mr. Evanina said, that at times it seems like background “noise.”

The agency noted that Russia remains a threat to the “security of our elections,” while China is more focused on “stealing our technology and intellectual property in an effort to erode United States economic and military superiority,” The Hill notes.