Nigeria’s Chief of Army Staff said terrorism could persist in the country for the next twenty years after Boko Haram claimed responsibility (HT: CFR) for killing dozens of farmers in Borno State. CFR’s John Campbell explains the threat of Boko Haram.

President Muhammadu Buhari is failing to live up to his promises to ensure respect for human rights, obey the rule of law, and tackle corruption, says a leading rights activist.

Since assuming office in May 2015, Mr Buhari’s government has consistently flouted constitutionally and internationally guaranteed human rights. The growing crackdown on peaceful dissent, and the signing into law of the Companies and Allied Matters Act (CAMA) 2020 to squeeze civic space and impose restrictions on civil society suggest that this brutal repression will only escalate under his watch, writes Kolawole Olaniyan, author of Corruption and Human Rights Law in Africa, and a legal adviser at Amnesty International’s International Secretariat:

The Nigerian Constitution of 1999 [as amended] and human rights treaties such as the International Covenant on Civil and Political Rights and African Charter on Human and Peoples’ Rights to which Nigeria is a state party guarantee the rights to life, freedom of expression and peaceful assembly, and prohibit criminalization of dissenting voices. Yet, authorities routinely crackdown on human rights, and security agents use unlawful force to stop peaceful protests. The failure to hold suspected perpetrators to account is an attack on human rights, and on the victims who have endured horrific abuses.

Civil society experts Debebe Hailegebriel of Ethiopia, Edie Cux and Ricardo Barrientos of Guatemala, and Ibrahim Faruk of Nigeria (above) discussed the tactics and lessons learned as civil society pushed back on attempts by governments in their countries to restrict civic space. UN Special Rapporteur Clement Voule also joined a World Movement for Democracy forum to discuss how these cases relate to worldwide trends. 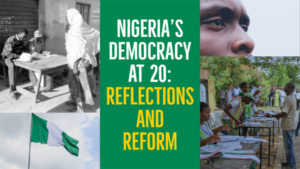 Mr. Buhari and his government ought to learn from John Locke’s dictum that “Wherever law ends, tyranny begins”, Olaniyan adds. Civil society groups, human rights defenders and activists should continue to put pressure on the government to ensure the realization of human rights to which Nigeria has subscribed, and to end the general erosion of rights.