From Miami to Mexico City, protests have erupted across Latin American communities in solidarity with demonstrators in Cuba, Reuters reports (above).

Cuba’s dissidents are emboldened despite the current crackdown over recent days, the New York Times adds.

“The massive peaceful protests were historic,” said Erika Guevara-Rosas, the Americas director at Amnesty International. “While the forms of repression are the same, we’re watching a substantial and dangerous mobilization of police and military security forces“.

One man has died and more than 140 have been arrested or reported as missing during the rare demonstrations against the Communist government, the BBC reports. Waldo Herrera told Reuters news agency officers had drawn their guns and started shooting at demonstrators.

“I think the Communists have lost control, they won’t have a solution to this situation,” he said.

Is the regime in danger? Hardly, argues Amherst College professor Javier Corrales, the author, most recently, of “Fixing Democracy.” The government has perfected, and indeed exported, the art of Communist repression to great effect. It is a combination of Soviet-modeled security forces, vigilante neighborhood committees and government-sponsored thugs disguised as civilians, he writes for the Times.

Sunday’s protests nonetheless may be a turning point, adds Corrales, a contributor to the Journal of Democracy. In the past, the regime needed only to apply repression surgically. Fear was pervasive and kept everyone at home. But as so many Cubans chanted on Sunday, “We are no longer afraid.” 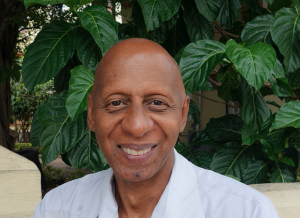 Until now the few open dissidents on the island, used to being imprisoned for criticizing the government, could rely on knowing everyone they’d share a police cell with following a protest. But this time, as the sensationally brave serial dissenter Farinas said, he recognized none of the mostly young demonstrators he was detained with, David Aronowitz writes for the (London) Times.

“I told the state security guard who arrested me, ‘You’re going to have to change,’” Mr. Fariñas, 59, told the NY Times. “‘This is the people, and not just the people, but the youth. Look at them: They’ve decided they are not just going to continue leaving the country — they want change here.’”

President Joe Biden called the protests “remarkable” and a “clarion call for freedom,” praising thousands of Cubans who took the streets to protest food shortages and high prices amid the coronavirus crisis — one of the island’s biggest antigovernment demonstrations in recent memory, Associated Press adds.

“The Cuban people are demanding their freedom from an authoritarian regime. I don’t think we’ve seen anything like this protest in a long long time, if, quite frankly, ever,” Biden said.

In a telling instance of autocratic solidarity, Iran joined Russia and China in warning the United States not to intervene in Cuba’s internal affairs, Newsweek reports.

But “it would be a grievous mistake for the Cuban regime to interpret what is happening in dozens of towns and cities across the island as the result or product of anything the United States has done,” said U.S. Secretary of State Anthony Blinken. 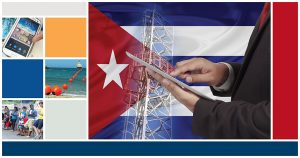 Rosa Maria Payá (see below), executive director of the Foundation for Panamerican Democracy, said that aside from the U.S. providing internet service to Cuba, she would like the Biden administration to say it will not negotiate with the Cuban government during a transition from communism, the Miami Herald reports.

What Cubans need is “freedom from the dictatorship,” not negotiations, Paya said, adding that giving people on the island a way to communicate with the outside world is vital. “The United States has the capacity to provide internet access to the Cuban people. The internet access right now could save lives in the middle of the repression.” 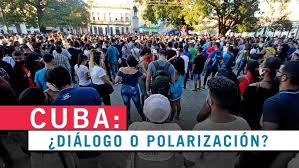 Camila Remón, a member of Movimiento San Isidro, (right), said the recent protests were enabled by widespread internet connectivity on the Island, a relatively new phenomenon, the Times adds.

“It’s been a very effective means to speak out,” she said, noting the flurry of online videos, many of them broadcast live, that gave people around the world a real-time glimpse of what was happening inside Cuba as the protests unfolded. “We’ve managed to get out a lot of content showing what the regime does.”

The protests amount to a dam that has burst, other observers suggest. 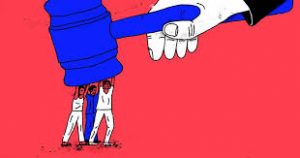 Biden “should be sure we stay on the side of the Cuban people against this vicious regime,” said  Abrams, a veteran Latin America watcher and former senior State Department official. “That means rhetorical support, support in international organizations, and an absolute refusal to weaken sanctions as the regime brutalizes the population,” he told POLITICO.

Washington should do what it can to boost the shortwave radio signals carrying Miami-based Radio Martí, says analyst Noah Rothman. The Biden administration should threaten Cuban leaders with sanctions as well as travel and visa restrictions if they carry out Cuban President Miguel Díaz-Canel’s threat to violently suppress the protests. And if these demonstrations are put down, the U.S. should reduce its diplomatic presence in Cuba and restrict the movements of Cuban operatives inside the United States, he writes for MSNBC.

“Unlike their parents and grandparents, Cubans in their 20s, 30s and 40s never enjoyed a sustained, functional contract with the regime: We provide you a living, and in exchange you give us support, or at least acquiescence.”

“At the end of the day, regime survival is the most important thing to the Cuban government,” said Brian Fonseca, director of the Jack D. Gordon Institute for Public Policy at Florida International University.  “This is not the traditional branches of the military in the street. These are special forces that are specifically established to address domestic uprising,” Fonseca said. “They will pull from the military if the uprisings become unmanageable for these domestic special brigades.”

Social media firm NetBlocks, based in London, said on its website that Facebook, WhatsApp, Instagram and Telegram in Cuba were partially disrupted on Monday and Tuesday, Reuters adds.

“The pattern of restrictions observed in Cuba indicate an ongoing crackdown on messaging platforms used to organize and share news of protests in real-time,” said NetBlocks director Alp Toker. “At the same time, some connectivity is preserved to maintain a semblance of normality.”