The liberal world order is neither inherently universal, nor is it the inevitable path of societies across the globe, argues Stratfor’s senior analyst, Rodger Baker:

Like the ideals of democracy it embodies, the liberal world order — for us, a Western-oriented financial and trade system that emerged following World War II and which prescribes democracy as the sole path for all societies — is a political construct that has evolved and developed in a certain place and at a certain time. Such historicization is not to argue against the liberal world order’s merits nor deny its problems and challenges.

“There is no irresistible march of history toward progress or liberal democracy, just as the future history espoused by Marxists proved to be an analysis, not an inevitability,” Baker adds.

“Claiming that the liberal world order is in trouble is just a starting-point; a deeper account needs to show whether, and how, the interrelated elements of this order hang together,” according to analysts Constance Duncombe and Tim Dunne. “It may be, for example, that certain logics of the liberal order are more vulnerable than others. The post-Cold War agenda around democracy promotion seems, intuitively, at greater risk than the WTO regime for managing world trade,” they write for International Affairs. 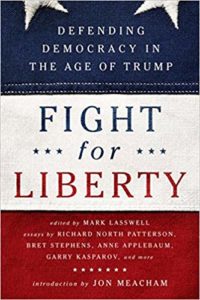 The liberal world order sees itself threatened as never before, analysts suggest (left).

“I think we are in a very, very grave period for the world,” former Secretary of State Henry Kissinger told the Financial Times.

He and the late Zbigniew Brzezinski “both considered ideas about the world order to be the key problem of our time. How could we create it? We had somewhat different ideas. But for both of us, we were above all concerned to raise diplomacy to that level of influence.”

The alternative to a robust alliance of transatlantic democracies is not appealing, Kissinger adds:

A divided Atlantic would turn Europe into “an appendage of Eurasia”, which would be at the mercy of a China that wants to restore its historic role as the Middle Kingdom and be “the principal adviser to all humanity”.

But efforts to dismantle the liberal world order obscure the more important question of whether it is feasible to do so, says James Kirchick.  He cites Brookings analyst Stewart Patrick’s observation that as a result of the threats to the “branches of Western solidarity …painstakingly cultivated over seven decades,” U.S. allies are “pursuing strategic autonomy,” “working with China to safeguard globalization,” and that with “U.S. abdication of global leadership,” the European Union stands as “the best hope for liberal internationalists.”

But the U.S. diplomatic and security apparatus is a behemoth, comprising tens of thousands of people, and it requires a great number of ideologically committed and bureaucratically skilled individuals to transform America’s world role, Kirchick writes for Foreign Policy.

A recent study by the RAND Corporation concludes that “deadly political conflict has been gradually declining, and anticipated trends in the major drivers of war and peace suggest that such conflict is likely to continue to decline over the next couple of decades,” notes Ali Wyne​, a recent Penn Kemble fellow at the National Endowment for Democracy​.

“The modernization of the world order would ideally result from farsighted diplomacy,” he writes for the Washington Post. “It is more likely, though, that policymakers will do little more than push for incremental improvements to an inadequate system, thereby enabling the aforementioned forces — ranging from external challenges to populist uprisings — to continue testing its foundations.”

“Across the pond, meanwhile, increasingly powerful populist forces from a broad ideological spectrum are contesting the legitimacy of the European project,” adds Wyne.

Europeans who believe that abandoning the Western liberal order would be an extraordinary act of stupidity must step up our game,” says Wolfgang Ischinger, who served as Germany’s ambassador to the United States from 2001 to 2006.

“Many Western societies are divided between those who believe in preserving the post-World War II order and those who would replace it with 19th-century nationalism,” he writes for the New York Times.

“We should also offer to work closely with those Americans who believe that a strong partnership with Europe remains in America’s best interest,” he adds. “Europeans need to engage, engage, engage: with Congress, with governors, with America’s business community and civil society.”