Populist parties have more than tripled their support in Europe in the last 20 years, securing enough votes to put their leaders into government posts in 11 countries and challenging the established political order, The Guardian reports:

The steady growth in support for European populist parties, particularly on the right, is revealed in a groundbreaking analysis of their performance in national elections in 31 European countries over two decades, conducted by The Guardian in conjunction with more than 30 leading political scientists. The data shows that populism has been consistently on the rise since at least 1998. Two decades ago, populist parties were largely a marginal force, accounting for just 7% of votes across the continent; in the most recent national elections, one in four votes cast was for a populist party.

“Not so long ago populism was a phenomenon of the political fringes,” said Matthijs Rooduijn, a political sociologist at the University of Amsterdam, who led the research project. “The breeding ground for populism has become increasingly fertile, and populist parties are ever more capable of reaping the rewards.” 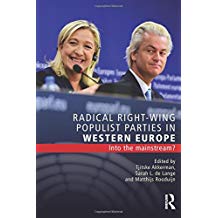 Why have populist parties tripled their vote in Europe over the past 20 years, entered government in 11 European countries and attracted the votes of more than a quarter of Europeans? asks Rooduijn, co-author of Persuasive Populism and Radical Right-Wing Parties in Western Europe:

The Democratic Decay Resource (below) is designed to be a hub, resource, and platform for researchers and policymakers focused on addressing democratic decay around the world,  formally launched in October, the National Endowment for Democracy’s International Forum for Democratic Studies reports. The Resource contains seven key sections: research guides, a concept index, experts’ database, events database, teaching materials, campaigns, and links.

“There are three main reasons for the sharp rise of populism in Europe,” said Cas Mudde, a professor in international affairs at the University of Georgia, and author of ‘Populism: a Very Short Introduction’. “The great recession, which created a few strong left populist parties in the south, the so-called refugee crisis, which was a catalyst for right populists, and finally the transformation of non-populist parties into populist parties – notably Fidesz and Law and Justice [in Poland].”

“The success of such politicians has very much to do with their capacity to convince their audiences that they do not belong to the traditional political system,” said Claudia Alvares, an associate professor at Lusofona University in Lisbon, who was not involved in the Guardian research project. “As such, they are on a par with the people to the extent that neither they nor the people belong to the ‘corrupt’ elites.”