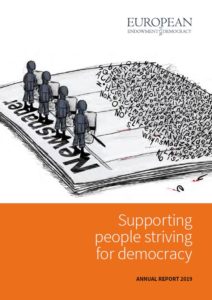 The picture for democracy and civil society was mixed across the European Neighbourhood in 2019, according to Jerzy Pomianowski, Executive Director of the European Endowment for Democracy (EED). Some of the more worrying trends included continued attempts to cripple civil society and muzzle free speech, with activists in many countries harassed or physically targeted with impunity, he notes in a foreword to the democracy assistance group’s 2019 Annual Report, Supporting People Striving for Democracy :

Legal bureaucratic measures were frequently used to limit the registration and functioning of NGOs. There were growing restrictions on international funding for NGOs in other countries, often under the pretext of preventing funding for terrorist activities. Disinformation remains an important tool used to undermine democratic values and discredit those who stand up for them.

Despite such worrying trends, individuals living in difficult and repressive political environments retain hope that they may aspire to a better future, evident in large-scale protests in Algeria, Lebanon, and the Western Balkans which spoke of deep dissatisfaction with corrupt and autocratic regimes and challenged the status quo, notes David McAllister, Chair of the EED Board of Governors and Member of the European Parliament. These protests send a powerful message to us Europeans at a time of moral crisis at home. 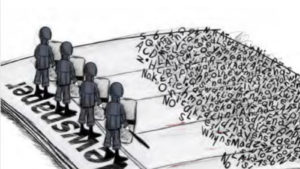 The European Endowment for Democracy (EED) – the European counterpart to the US-based National Endowment for Democracy (NED) – is an independent, grant-making organisation, established in 2013 by the European Union (EU) and EU member states as an autonomous International Trust Fund to foster democracy in the European Neighbourhood (Eastern Partnership – EaP – and Middle East and North Africa – MENA), the Western Balkans, and beyond. EED supports civil society organisations, pro-democracy movements, civic and political activists, and independent media platforms and journalists working towards a pluralistic, democratic political system.