People, businesses, and institutions have been remarkably quick to adopt or call for practices that they might once have dragged their heels on, including working from home, conference-calling to accommodate people with disabilities, proper sick leave, and flexible child-care arrangements. ….Aspects of America’s identity may need rethinking after COVID-19. Many of the country’s values have seemed to work against it during the pandemic. Its individualism, exceptionalism, and tendency to equate doing whatever you want with an act of resistance meant that when it came time to save lives and stay indoors, some people flocked to bars and clubs.

“It depends a lot on how long this crisis and the restriction of fundamental freedoms last,” says Wolfgang Merkel, head of the Department of Democracy and Democratization at the Berlin Social Science Center. He sees the freedom of movement, assembly, and religion being “massively limited” at the moment. Merkel is particularly concerned about two possible scenarios:

Some are exploiting the situation to strangle democracy, warns Rosa Balfour, a senior fellow in the Europe Program at the German Marshall Fund. EU leaders meeting virtually on March 26, 2020, will need to demonstrate that they can rise to the challenge and make the right choices, she told Carnegie Europe’s Judy Dempsey.*

Early talk on the global impact of the COVID-19 pandemic centered on the fact that democracies were better equipped to deal with health crises because of higher transparency, notes Ken Godfrey, executive director of the European Partnership for Democracy.  That seems to have changed in recent weeks as China has been widely praised for its response, leading to calls for harsher security measures by governments, state surveillance of citizens, and clampdowns on freedom of speech online. 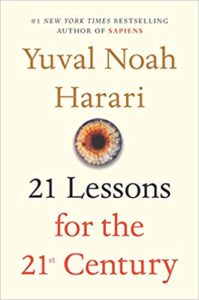 In this time of crisis, we face two particularly important choices, argues Yuval Noah Harari, the author of ‘Sapiens’, ‘Homo Deus’ and ‘21 Lessons for the 21st Century’. The first is between totalitarian surveillance and citizen empowerment. The second is between nationalist isolation and global solidarity, he writes for The Financial Times (free access):

Humanity needs to make a choice. Will we travel down the route of disunity, or will we adopt the path of global solidarity? If we choose disunity, this will not only prolong the crisis, but will probably result in even worse catastrophes in the future. If we choose global solidarity, it will be a victory not only against the coronavirus, but against all future epidemics and crises that might assail humankind in the 21st century.

Will things be different, even better, after the COVID-19 crisis? We might demonstrate renewed social resilience capacity, on two conditions, adds Stephen Boucher of Dreamocracy:

First, we need to confirm that the recent but fragile move toward a more “deliberative” Europe is key. “Democratic societies build resilience by strengthening the engagement of their citizens, because that is the way to build consensus and also to generate new ideas that work,” states Roger Casale of Europe’s People’s Forum. Unfortunately, EU governments are scaling back their plans to consult citizens in the context of the Conference on the Future of Europe.

Several of the democracies that made the most progress in combating the virus, including South Korea, Taiwan, and Hong Kong (along with authoritarian countries such as Singapore), bore scars from previous epidemics that spurred them to act quickly when a novel coronavirus was first reported in China in late 2019, The Atlantic’s Uri Friedman adds. The U.S. government prides itself on being prepared for 21st-century threats such as cyberwarfare and “great-power competition,” but it wasn’t nearly as prepared for the modern danger of pandemic disease.

The rich world, meanwhile, should help the poor world swiftly and copiously, The Economist contends:

The IMF says it is ready to deploy its $1trn lending capacity. Much more may be needed. As The Economist went to press, the g20 was about to set out a plan. It should be generous. Some of those vast rich-world bail-out pots should be used to cushion the suffering of the global south. China is winning influence with high-profile deliveries of medical equipment. Poor countries will remember who helped them.

Despite hopes in Washington that COVID-19 may hasten the Islamic Republic’s collapse, the virus is more likely to accelerate its transition from clerical rule to military rule, notes Karim Sadjadpour, a senior fellow at the Carnegie Endowment for International Peace:

Iran’s leaders initially downplayed the dangers of the virus…. Supreme Leader Ayatollah Ali Khamenei shifted from denial to deflection. He claimed there was evidence that COVID-19 may be a biological attack, ostensibly by the United States, which provided him the pretext to appoint a Revolutionary Guard commander, rather than a physician, to lead a newly formed “Health Command Center.”

The confinement of at least half of China’s population since the COVID-19 virus first emerged in December has caused productivity to drop massively, writes Fabian Kretschmer in Blätter: the country’s growth rates are expected to fall from over six per cent to under one in the first quarter of 2020. Impacts on free speech are equally dramatic: social media images of Wuhan’s crowded hospitals contradict official communication channels that sought to play down the epidemic. The popular view is: ‘“We know they are lying; they know that we know they are lying, and they still lie”. (HT: Eurozine. a National Endowment for Democracy (NED) partner.

The EU and those national leaders who are willing to defend the values and principles on which the EU is based need to openly challenge any effort to undermine democracy or the rule of law, adds Daniela Schwarzer, Director of the German Council on Foreign Relations. The health crisis provides opportunities to do just that, as Hungarian Prime Minister Viktor Orbán’s recent initiative to install an indefinite state of emergency shows.

What are the geopolitical implications of COVID-19? the Carnegie Endowment asks. What are the available policy options to address the economic and financial fallout of the pandemic? Tune in for a live online discussion on Wednesday, April 1 from 5:30 to 6:30 p.m. (GMT+2) on the Carnegie Middle East Center’s YouTube page. The discussion will be held in English. Viewers may submit questions in the comments section during the livestream.