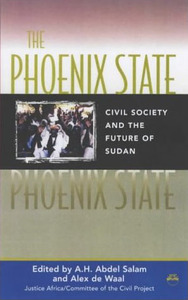 The peaceful revolution currently taking place in Sudan is part of a series of attempts over three decades that have been crushed by bullets and met with bloodshed, leaving citizens heartbroken and bereaved, notes Azaz Shami, a Sudanese American human rights advocate.

The peaceful protests brought down Al-Bashir’s 30-year rule, but the success is partial as we now wrestle with the Transitional Military Council (TMC), he writes in an Op-Ed published in Washington Post:

The new Sudan that my fellow Sudanese and I envision is democratic and prosperous, a source of stability in the region and a source of security for its people. It is a Sudan that utilizes its resources for development rather than for sale to the highest bidder. A Sudan that is an ally for global efforts toward development and international peace.

Frustrated by a lack of progress, the Declaration of Freedom and Change Forces (DFCF), a broad coalition of opposition groups headed by the Sudanese Professionals Association, called on Wednesday for a campaign of civil disobedience to crank up the pressure on the military, Reuters adds:

The SPA has said such a campaign would likely focus on mass strikes, which have been successful in previous uprisings in post-independence Sudan. Strikes called by the SPA before Bashir’s fall met with limited success, but workers may be less cowed following his removal.

“We have all options open from now on,” Ahmed Rabie, an influential SPA member, told Reuters. “If (the council) insists on holding on to power, we are going to consider this a military coup, and we will escalate our tactics, peacefully.

”These are heady days for the north-east African country of 40m people, but the way ahead is far from clear, the FT adds:

“Nobody can answer the question, what happens next?” says Osman Mirghani, a prominent journalist who was imprisoned for 37 days during the protests. “Is this a military intervention or a military coup? There’s only one centimetre between the two.”

Referring to popular revolts in 1964 and 1985, in which the military ended up reasserting control, Mr Mirghani asks: “Is this going to take Sudan to a new future of real political reform, or is it just going to repeat what happened in the last two uprisings?” The military council may say it does not seek power, he says, but “they have the weapons; that is their power”.

The people of Sudan have endured decades of poor governance and repression. By taking to the streets, they have shown yet again that unresponsive strongman regimes have an expiration date, notes Emily Estelle, a senior analyst with the Critical Threats Project at the American Enterprise Institute. The danger comes in failed transitions — when leaders grasp desperately for power, infighting overtakes progress, or other states superimpose their power struggles and proxy wars. Algeria and Sudan are at risk for all of these, she writes for The LA Times.

Sudan is delicately poised between hopes for democratization and despair at endless violence, notes Alex de Waal, co-author of The Phoenix State (above). The Sudanese people have shown astonishing patience and courage, and demonstrated that mass demonstrations can bring down even the most entrenched authoritarian regime, he writes for Foreign Affairs.

“Foreign intervention cannot deliver democracy and peace to Sudan—only the Sudanese can do that—but coordinated action to encourage democracy and prevent more weapons from flowing into the hands of rival factions can at least minimize the risk that the transition descends into chaos,” de Waal contends. 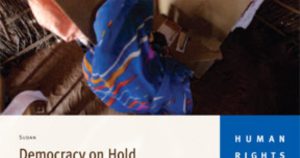 1. Respect for human rights: The Sudanese peoples’ rights to freedom of expression, peaceful assembly and association, which are critical for the transition, must be protected, respected and fulfilled.

If civilian rule does prevail in Sudan, it will affirm the relative progress toward democracy in Africa, The Christian Science Monitor adds:

This point was made clear on Monday when United Nations Secretary-General António Guterres met with Moussa Faki Mahamat, head of the 55-nation African Union’s governing commission. The two leaders endorsed “a consensual and civilian-led transition” in Sudan…. Since 2012, for example, the African Union has defined one of its roles as punishing member states whose leaders cling to power after losing an election or by changing a constitution. That role is difficult to implement but it at least acknowledges widespread support for democracy.

A survey of 45,000 Africans in 34 countries, released in March by Afrobarometer, found 68% prefer democracy. Just over half see their country as a functioning democracy. And 42% strongly “demand democracy.”

“U.S. policymakers need to use their platform and leverage, on Sudan’s leaders and those of other regional powers, to usher a genuine peaceful transition of power to a civilian-led interim government,” Shami adds. “Ensuring that the military council hands over power to a civilian government is key to helping guide Sudan into a hopeful, democratic and prosperous new era.”